Ahead of the start of the 2022-23 season, the defending Scottish Premiership champions, Celtic, have brought in Alexandro Bernabei from Argentine club Lanus, Aaron Mooy from Shanghai Port and Benjamin Siegrist from Dundee United. In addition to these, they have made the signings of Jota, Cameron Carter-Vickers, and Daizen Maeda on a permanent basis. Their main right-back, Josip Juranovic, has been linked with a move away from the club. If he does leave, the Hoops will need a man to fill in his shoes. Fortunately, they have Anthony Ralston in their books who could replicate that. 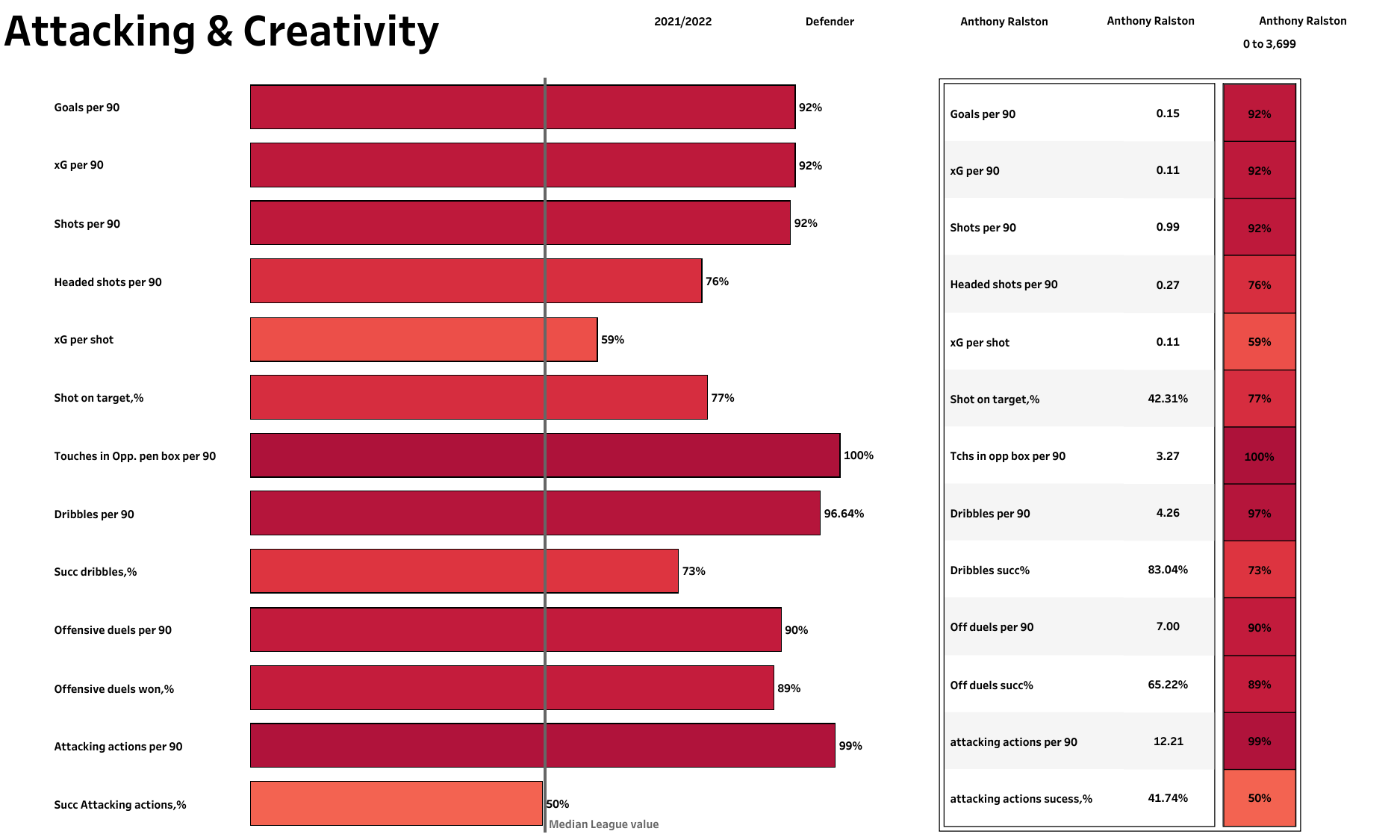 Ralston played 47 games across all competitions for Celtic last season, including 28 in the Scottish Premiership. He netted four goals for the team during his 2,234 minutes on the field. According to xG, he should have scored at a rate of 0.11 per 90, but he outperformed this by having a ‘goals per 90’ of 0.15. He took nearly one shot per 90 and hit a respectable 42.31% of them on target. The Scotsman took 3.27 touches in the attacking penalty area per 90, putting him in the 100th percentile among defenders. He also completed 83% of his 4.26 attempted take-ons per 90. 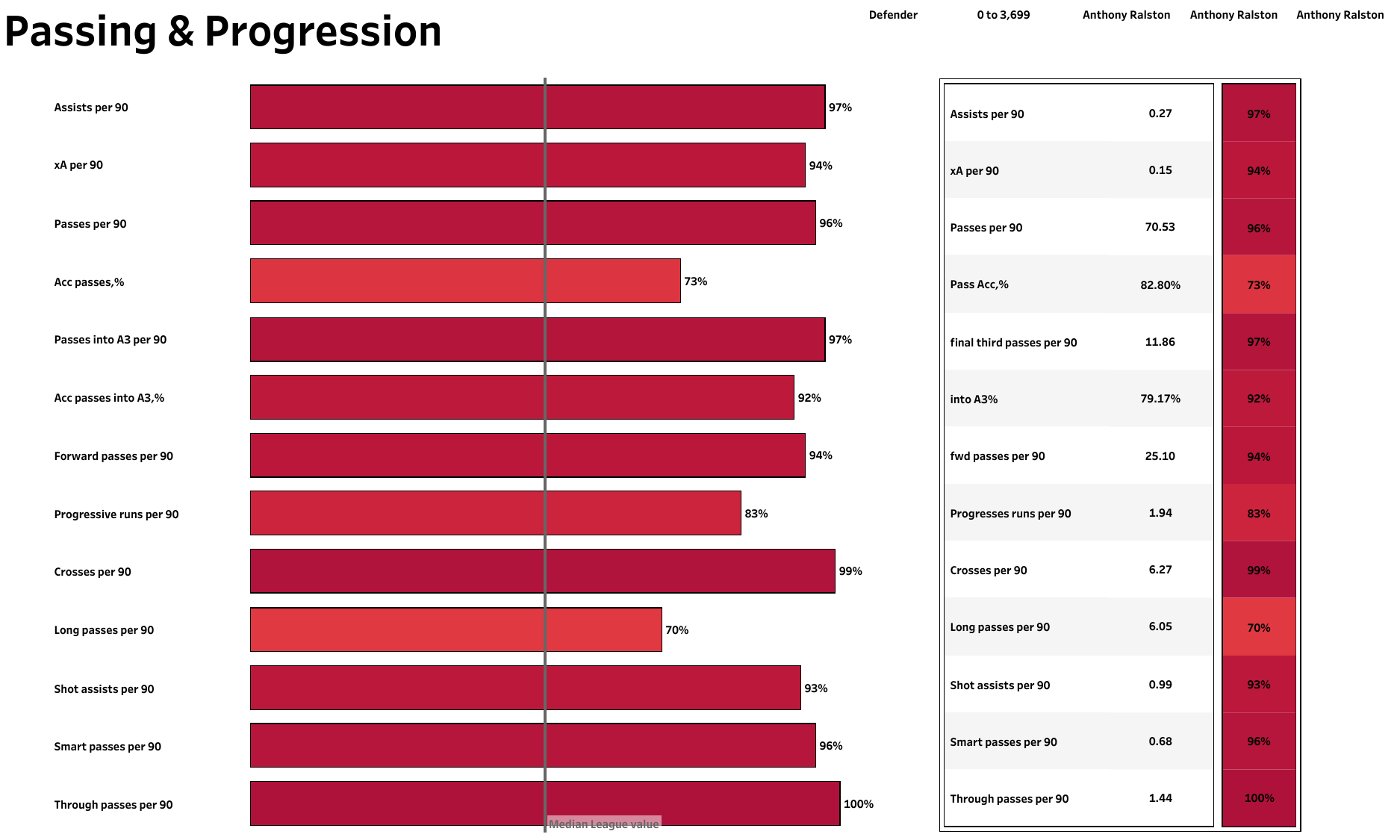 In addition to his four goals, Ralston provided nine assists, which was the joint-highest in the Celtic squad, along with Jota. He did so at a rate of 0.27 per 90, far higher than the 0.15 xA per 90 estimated. He was a volume passer of the ball, completing 58 out of 70 passes per 90. Nearly 12 of these passes were attempts to progress the ball into the final third. The Scotsman ranked among the top 1% of defenders in crosses per 90, with 6.27 per 90 to his name. He was also elite when it came to through balls played, with his 1.44 per 90 putting him in the 100th percentile. 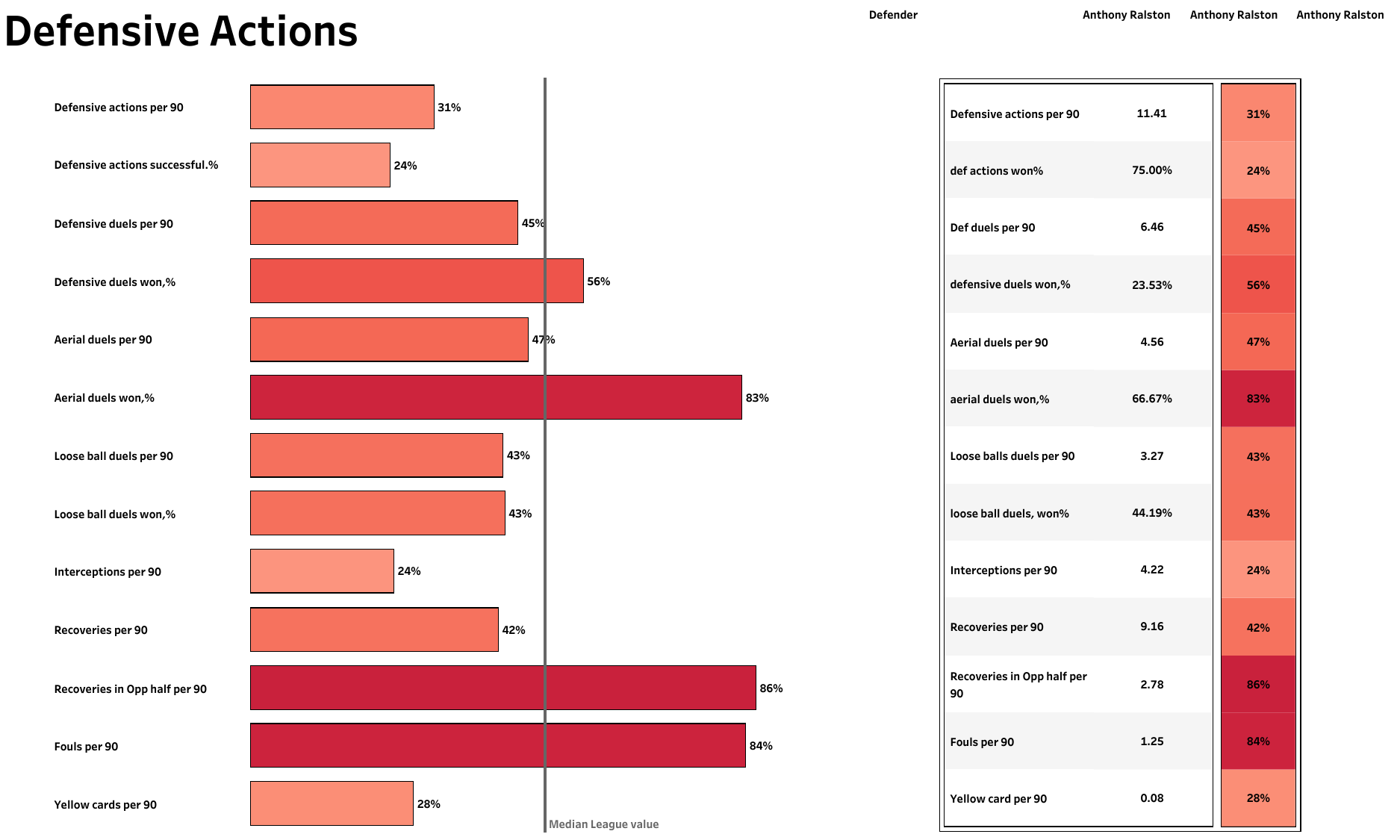 On the face of it, Ralston’s defensive rankings and numbers may not look good. However, he was part of a Celtic team that dominated possession of the ball in the vast majority of the games last season, meaning their defensive numbers would always be underrepresented. Still, there are a few areas where he stood out. The Scotsman won two-thirds of his attempted aerial duels and made 2.78 recoveries in the opponent’s half per 90, placing him in the top 17% and top 14%, respectively. But on the flipside, he did commit 1.25 fouls per 90, which was more than the number of fouls he drew per 90 (around 1.05 per 90).

Ralston played as a right-back and was bombing up and down the pitch. He was very much a key member of Celtic’s right-hand side. He was involved in seven offensive duels per 90 and 12.2 attacking actions per 90, coming out successful in 65.2% and 42%, respectively.

Last season, Anthony Ralston grew into one of the key members of the defensive department at Celtic. Often, Juranovic and Ralston did not compete for the same spot as the former played as a left-back in many matches. Should the Croatian leave, the Scotsman is very much capable of replacing him at Celtic Park.