Celtic won the 2021-22 Scottish Premiership title after suffering a bad season in 2020-21 which saw their bitter Old Firm Rivals lift it whilst remaining unbeaten. One of the key men for the Hoops’ title win on the pitch was centre-back Cameron Carter-Vickers. The England-born US international joined the Scottish giants on a loan deal on the deadline day of the summer transfer window of 2021. He has played in all but one match since then and has now joined Celtic on a permanent basis for a fee of €7 million. In this article, we will analyse the performances of Carter-Vickers at Celtic Park. 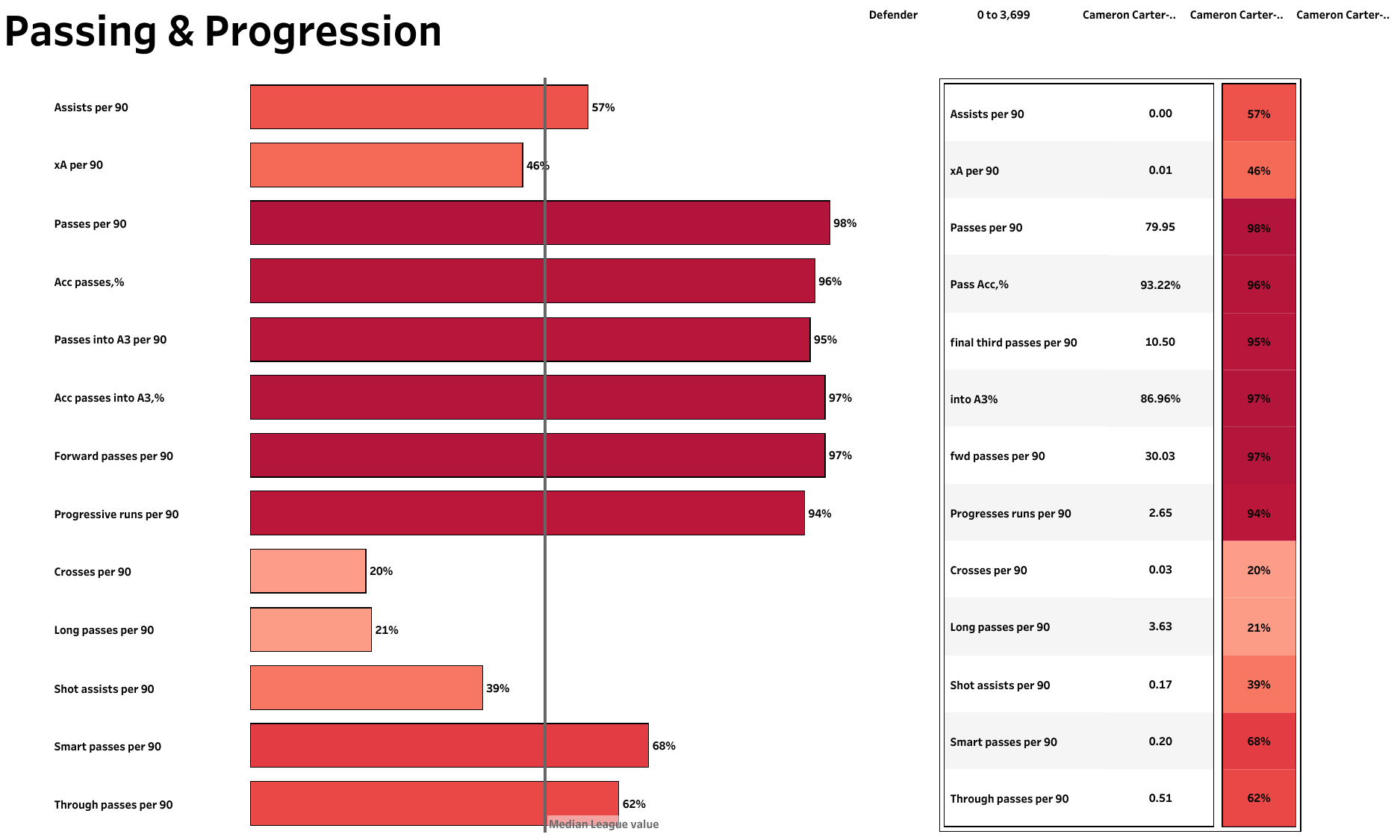 Carter-Vickers was an integral part of Ange Postecoglou’s side this season as he played 33 games out of a possible 34 since his arrival on deadline day. Carter-Vickers may have had only one assist this campaign, but he was an excellent passer of the ball. The Southend-born defender attempted nearly 80 passes per 90 at an astonishing accuracy of 93.22%. What’s more, he was equally good at progressing the ball with 10.5 pass attempts into the final third at an excellent pass accuracy of 87%. He was ranked in the top 5% or above for defenders in all the passing categories mentioned above. The US international, who has been capped 10 times, also made a whopping 2.65 progressive runs per 90, ranking him in the 94th percentile for defenders. 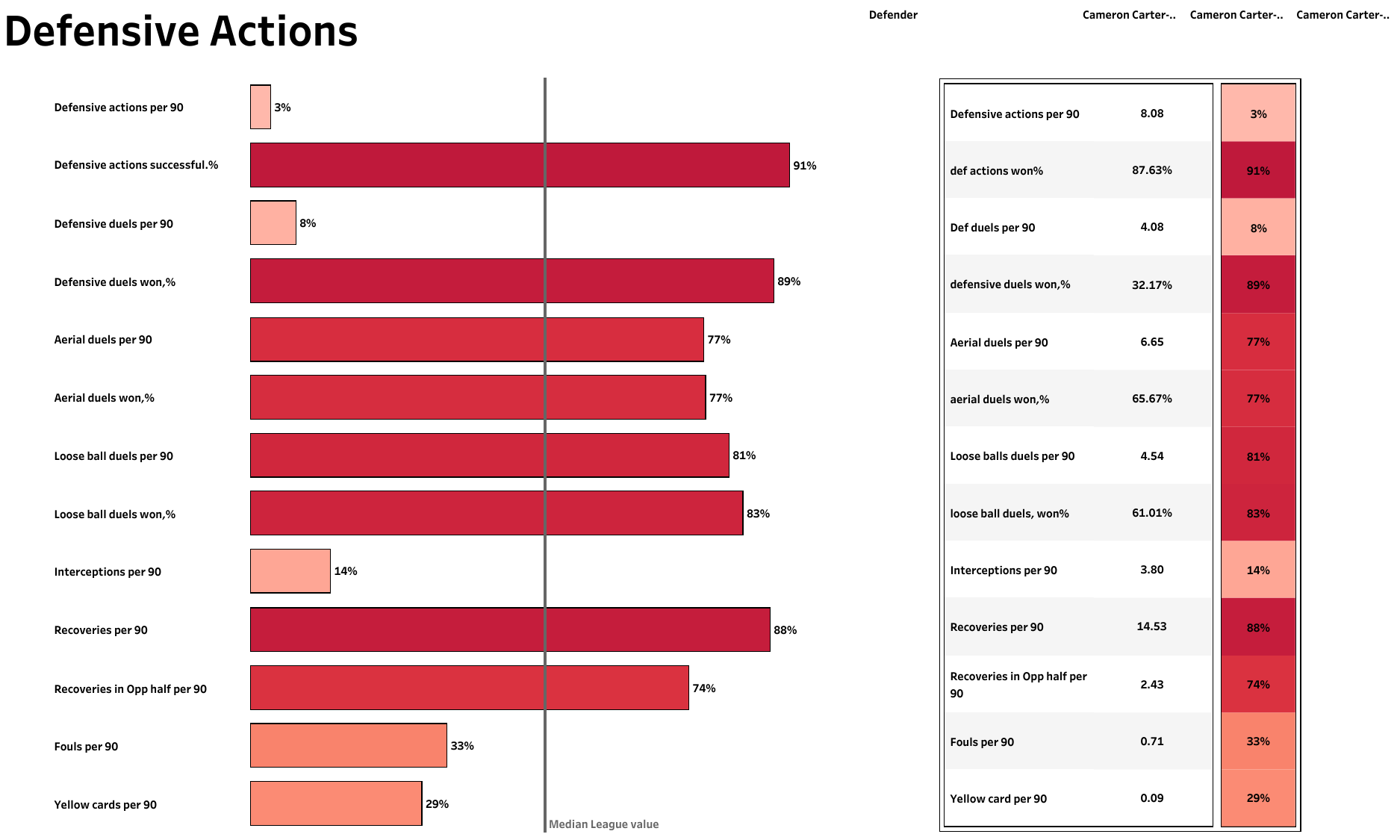 Carter-Vickers may have attempted only 8.08 defensive actions per 90 (bottom 3%), but he came out successful on 87.63% of the occasions (top 9%). Similarly, Carter-Vickers attempted just over four defensive duels per 90 (bottom 8%), but his success rate of 32.17% put him in the top 11% of defenders. The US international attempted over six and a half aerial duels per 90 and won 65.67% of them. He also won over 60% of the loose ball duels he contested. 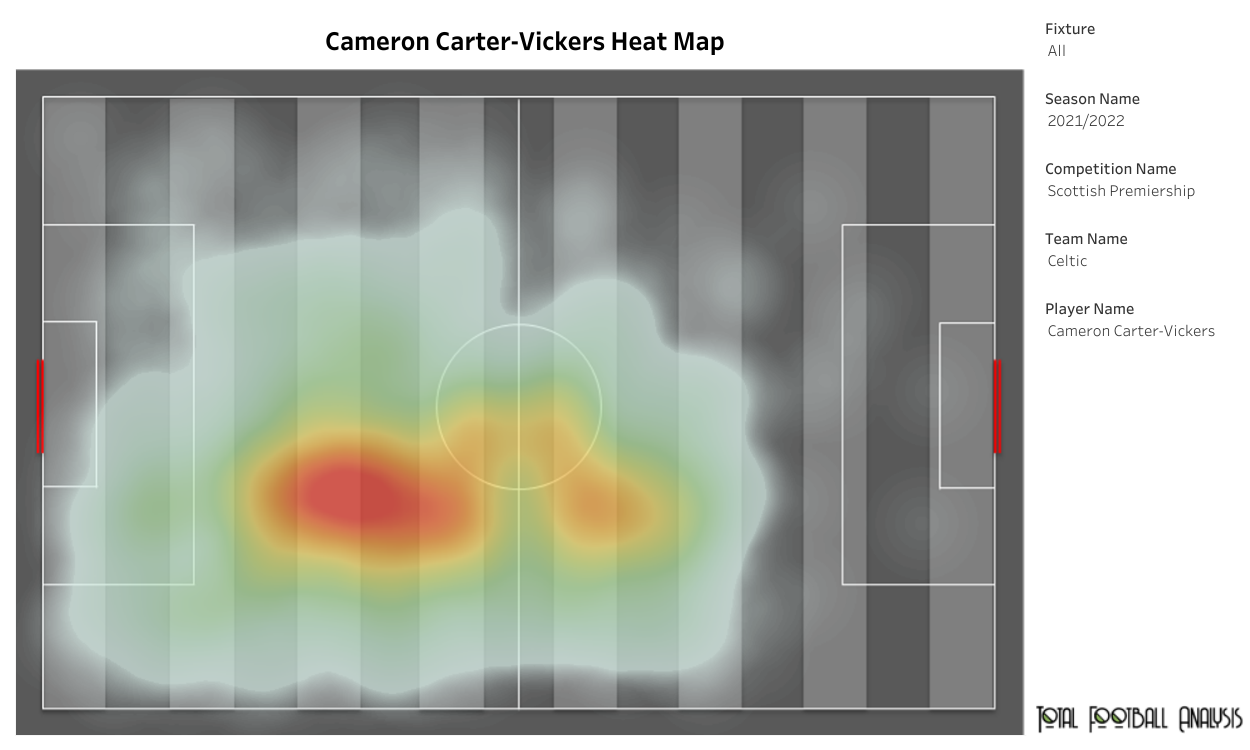 In the heat map shown above, we can see that Carter-Vickers predominantly dominated the area just outside his penalty box. He was the instigator of attacks as Celtic favoured heavy possession and slow build-up from the back. Carter-Vickers completed 3.8 interceptions per 90, 14.53 recoveries per 90 and 2.43 recoveries in the opposition’s half per 90. He also launched attacks from the back at regular intervals. 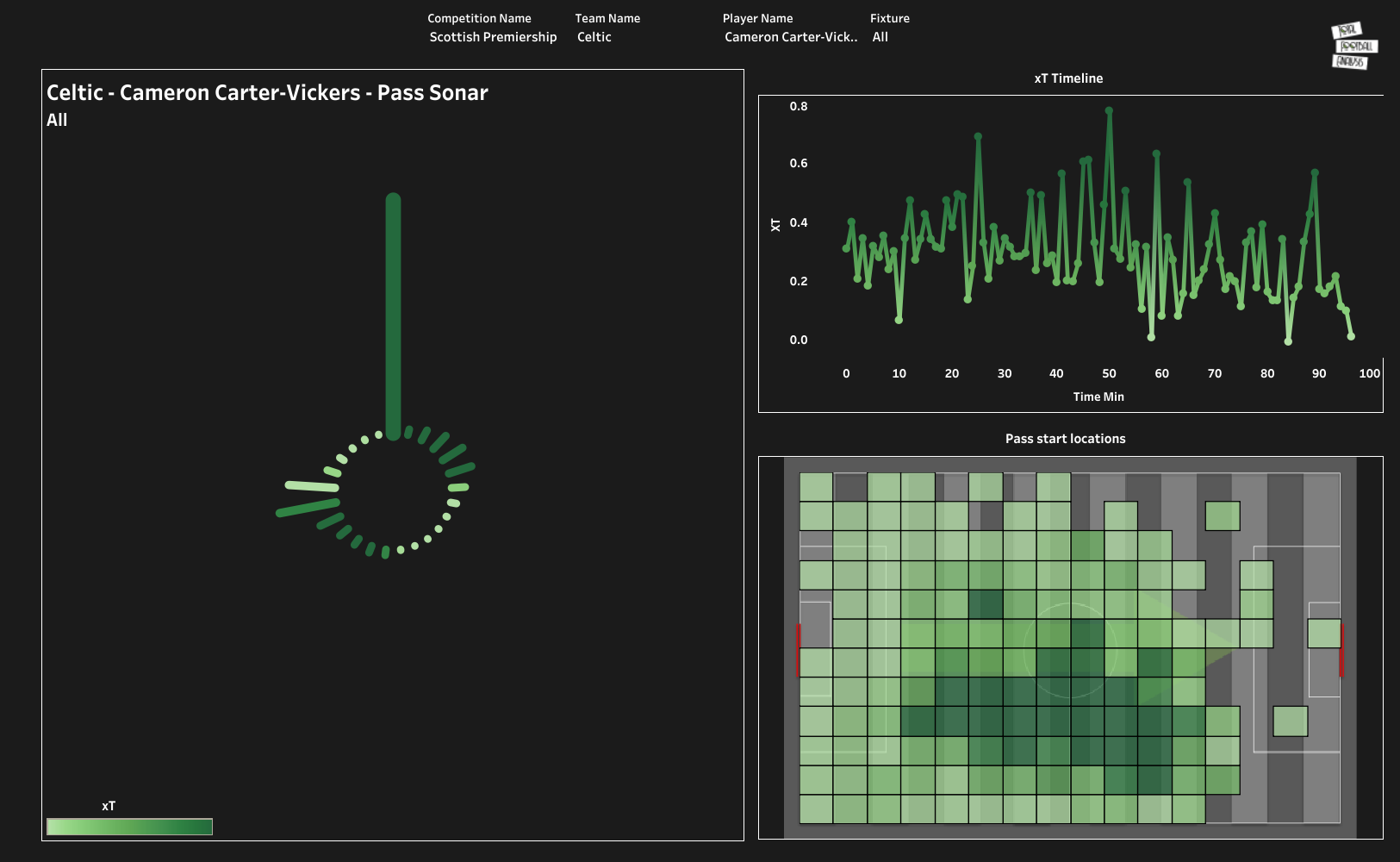 As shown in the above visual, Carter-Vickers was the main ball-playing defender at Celtic Park, frequently launching long balls and progressive passes upfield. He did this from his third and often made balls into the attacking third for the attackers to exploit spaces. His threat creation score hovered around the 0.5 mark.

Cameron Carter-Vickers had an excellent debut campaign at Celtic in the 2021-22 Scottish Premiership. And at €7 million euros, he looks like a brilliant value for money signing for the Hoops. The next challenge for Carter-Vickers would be to perform in the UEFA Champions League.