Celtic have made a blistering start to the January transfer window this time around, already announcing moves for Reo Hatate, Daizen Maeda, and Yosuke Ideguchi, while a move for Johnny Kenny is believed to be close as well. But the Hoops are not expected to stop here. They might have made a stunning start to the January transfer window and already added significant depth to their squad, but it is safe to say that they need to bring in more reinforcements if they are to put up a challenge against the Rangers for the Premiership title this season.

One area that Ange Postecoglou could do with more options right now is on the wings, particularly on the right wing. The picture is very different on the opposite flank though, with James Forrest and Karamoko Dembele both struggling with injuries, leaving Liel Abada as the main option there. On the left wing, they have Jota, who is on a season-long loan at this point, and Karamoko Dembele is out injured, while his current deal runs out next summer as well. 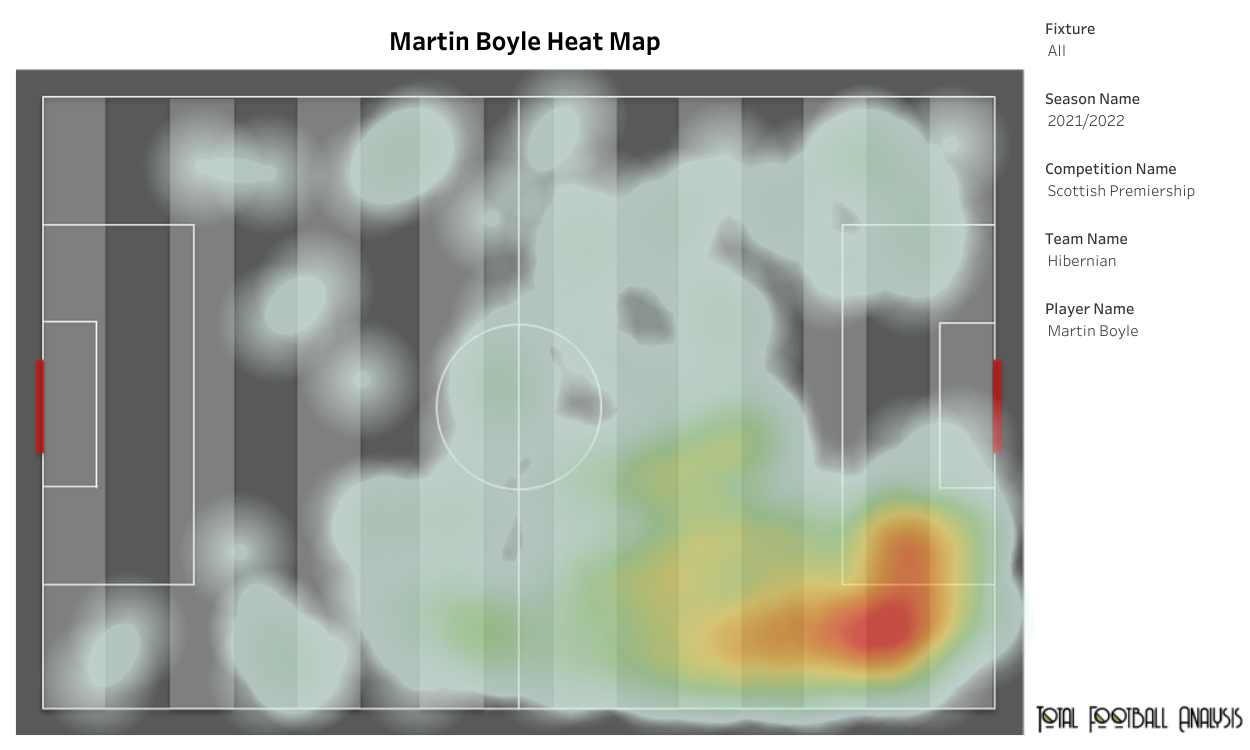 Martin Boyle has arguably been Hibernian’s best player for some time now and has been great this season as well. He has scored 14 goals and provided 5 assists in 27 appearances across all competitions. Celtic were linked with the player last season as well and it might have been a mistake not to make a push to sign him back then, considering how the 2020-21 campaign turned out for them. Boyle is the perfect choice for the Hoops, as he plays on the right flank, as seen in the above visual, and loved to play in wider positions from where he can prove to be a great threat to the opposition’s defense. 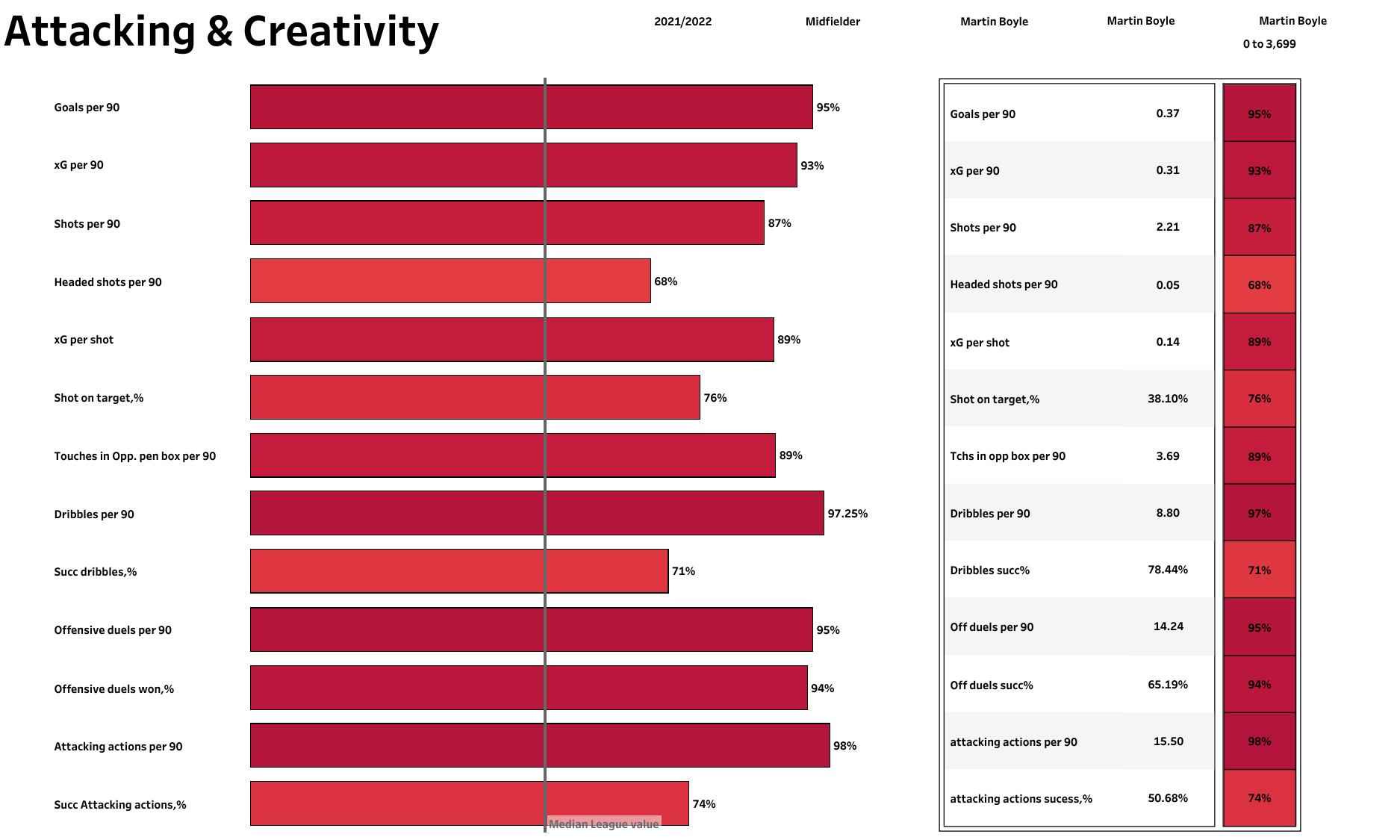 The above stats show us the attacking metrics of Martin Boyle, and it is clearly visible that Boyle is one of the best wingers in the league, as his stats are significantly better than the league median value. As indicated by the above stat, Boyle attacking and creative stats are top tier. He ranks highly in terms of xG per 90, xG per shot, dribbles per 90 and attacking chances per 90. Not only has he been versatile in scoring goals he has also created plenty of chances for his team. He is similarly effective with his offensive duels per 90. 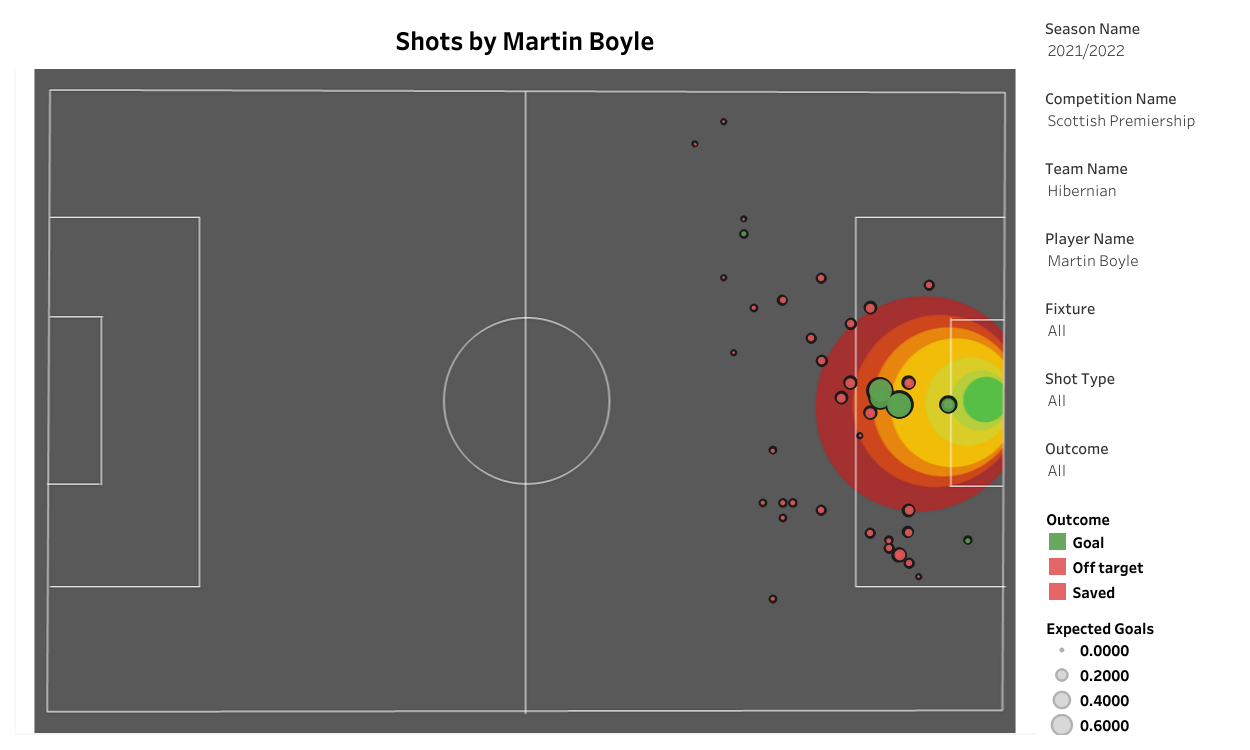 Boyle’s shot map this season shows that he has scored the majority of his goals from inside the opposition’s box. So far, he has only scored one goal from outside the opposition’s box. Boyle has attempted a total of 42 shots on goal with 16 shots on target. He has attempted shots from both flanks, which indicates he is a versatile player and can play on either flank. 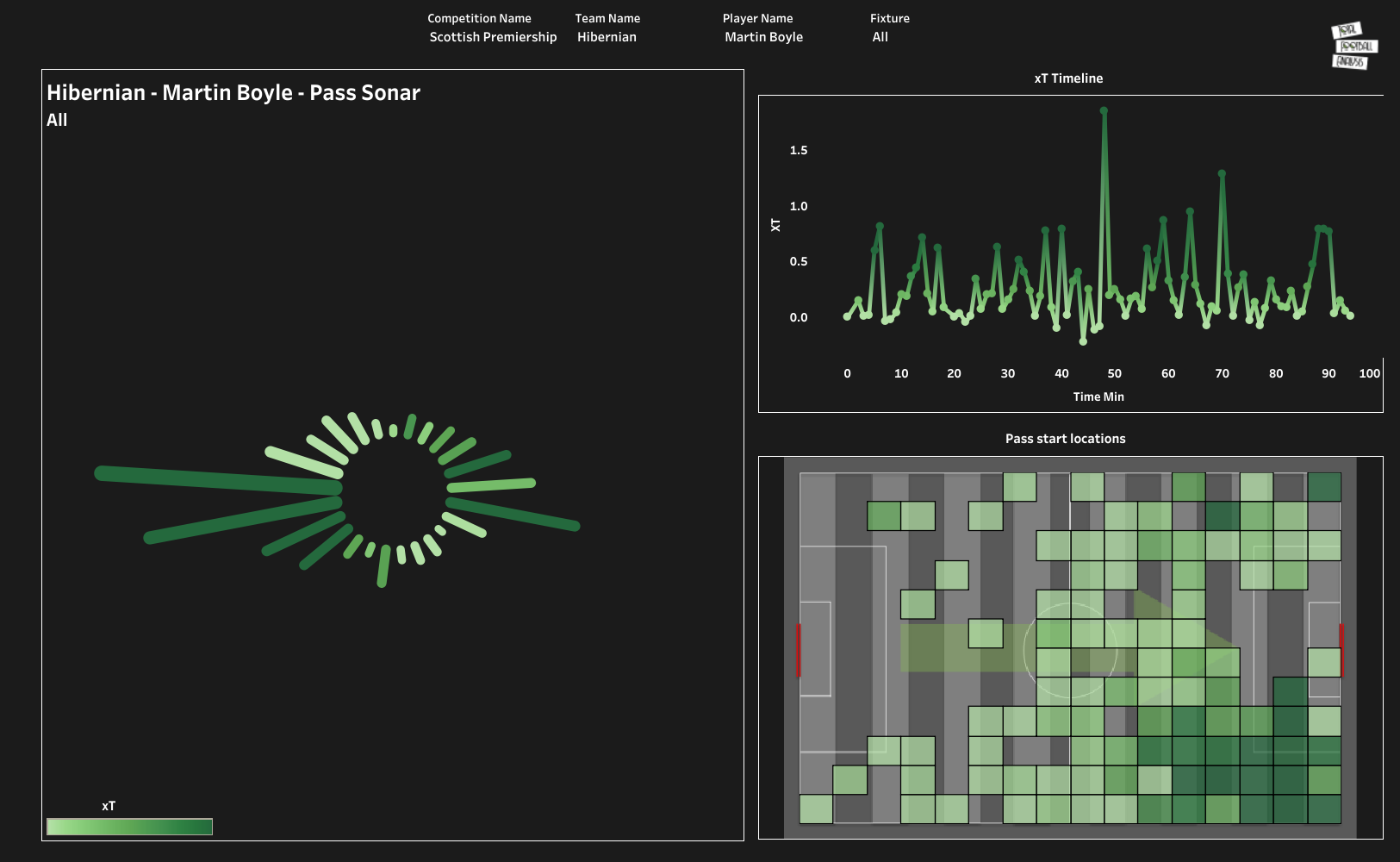 The above visual shows us the pass sonar for Boyle. It also indicates the pass start locations and the xT these passes have generated. From the visual, we can see that as Boyle plays on the right flank, most of his passes are towards his left, and these passes have generated a high xT. The pass start locations indicate that he loves playing in wider areas and can put great crosses into the penalty area from the right flank. The xT timeline indicates that he has an average xT of above 0.7 and is a constant threat throughout the game, and remains to be a threat till the dying moments of the game.

Martin Boyle’s stats indicate just how big of a threat he carries in the right-wing and in front of the opposition goal. He is already one of the leading scorers in the Scottish Premiership and is sure to improve on his performances as the season progresses.

The Hoops continue to be linked with Boyle though, and it is not hard to see why. They could do with a player like him on the wing. There have been rumors recently that Celtic could make an offer for him this January. Martin Boyle is a player that the Hoops have been linked with for a while, and there appears to be a major update on the situation. It is not hard to see why Celtic might be interested in making a move for Boyle, who has been very impressive for Hibernian in recent times. He could be a solid addition to the club.