Ange Postecoglou has had a tough job to fixate on his first choice right back as he has two brilliant options in Anthony Ralston and Josip Juranovic, who have been brilliant this season and have contributed immensely towards Celtic’s performances so far. The Celts are currently at the top of the Scottish Premiership table and have a one-point lead over Rangers. Ralston’s transformation into an all-action, goal-scoring right-back has been phenomenal. Juranovic, meanwhile, has been staggering and looked more than capable on both sides as a left or right back.

Juranovic is a very versatile player and started his career at Celtic in the left-back position. There are two reasons for that. First was the brilliant form of Anthony Ralston at right-back. Second, the fact that Celtic did not appear to have a clear first-choice left-back at Parkhead at that point in time. Recently, Greg Taylor has returned to the first XI and has started most of Celtic’s game as their first-choice left-back. This leaves Ralston and Juranovic fighting for a spot in the team as the first-choice right-back. Postecoglou has been rotating his right-backs and has given both players a chance in the first XI in the recent games. 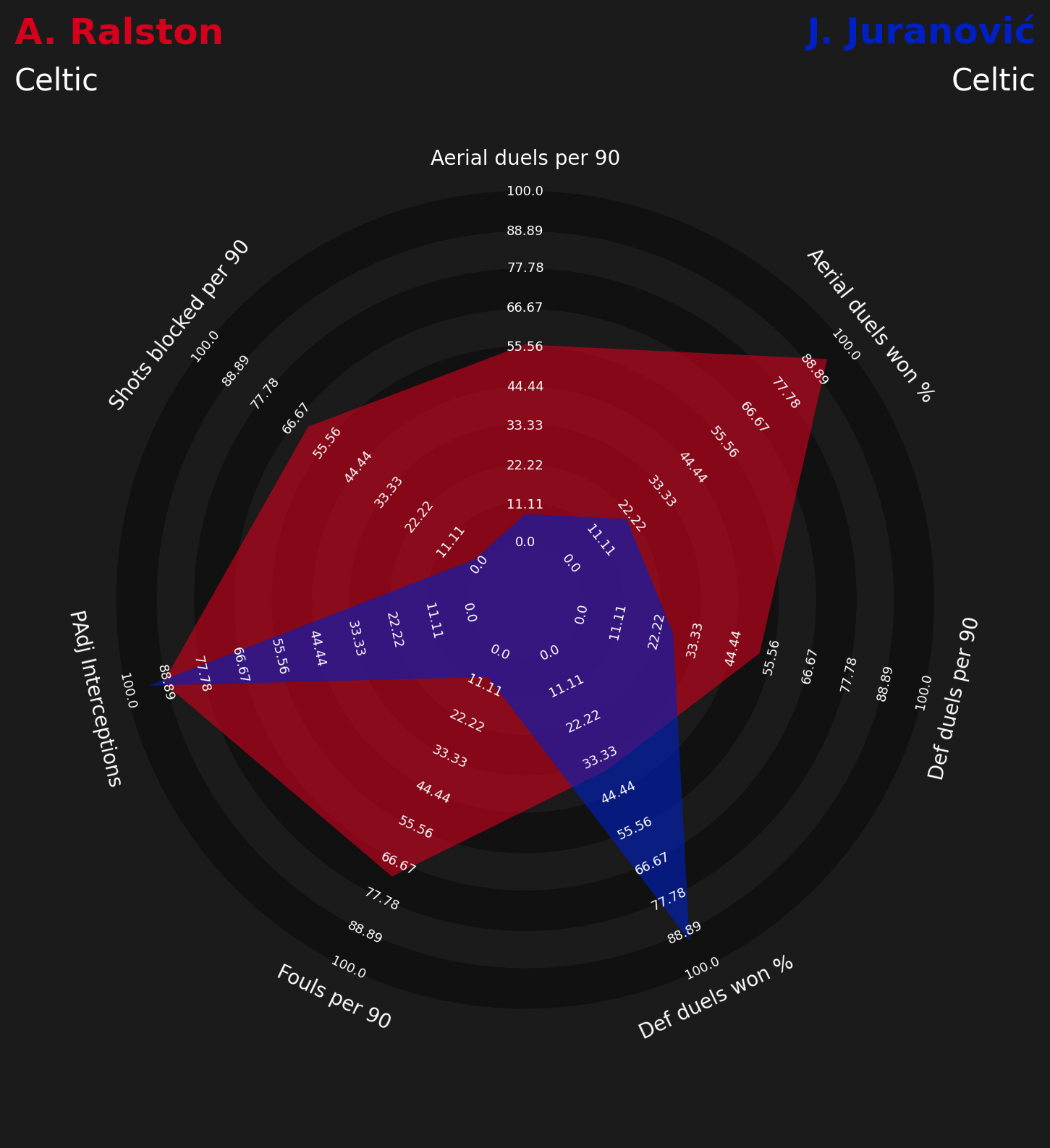 Full-backs under Postecoglou’s system need to be athletic to implement the high-intensity pressing tactics and get up and down the park to defend and provide offensively. They also need to be composed on the ball as they are required to come inverted into the central areas, collect the ball, and progress it forward. Juranovic makes more PAdj interceptions per 90 compared to Ralston. This metric involves a lot of athleticism as the players have to put themselves into contention to win the ball with their movement, but also indicates game intelligence by positioning themselves to win possession. Juranovic also has a higher success rate in winning defensive duels, but Ralston has won more aerial duels. 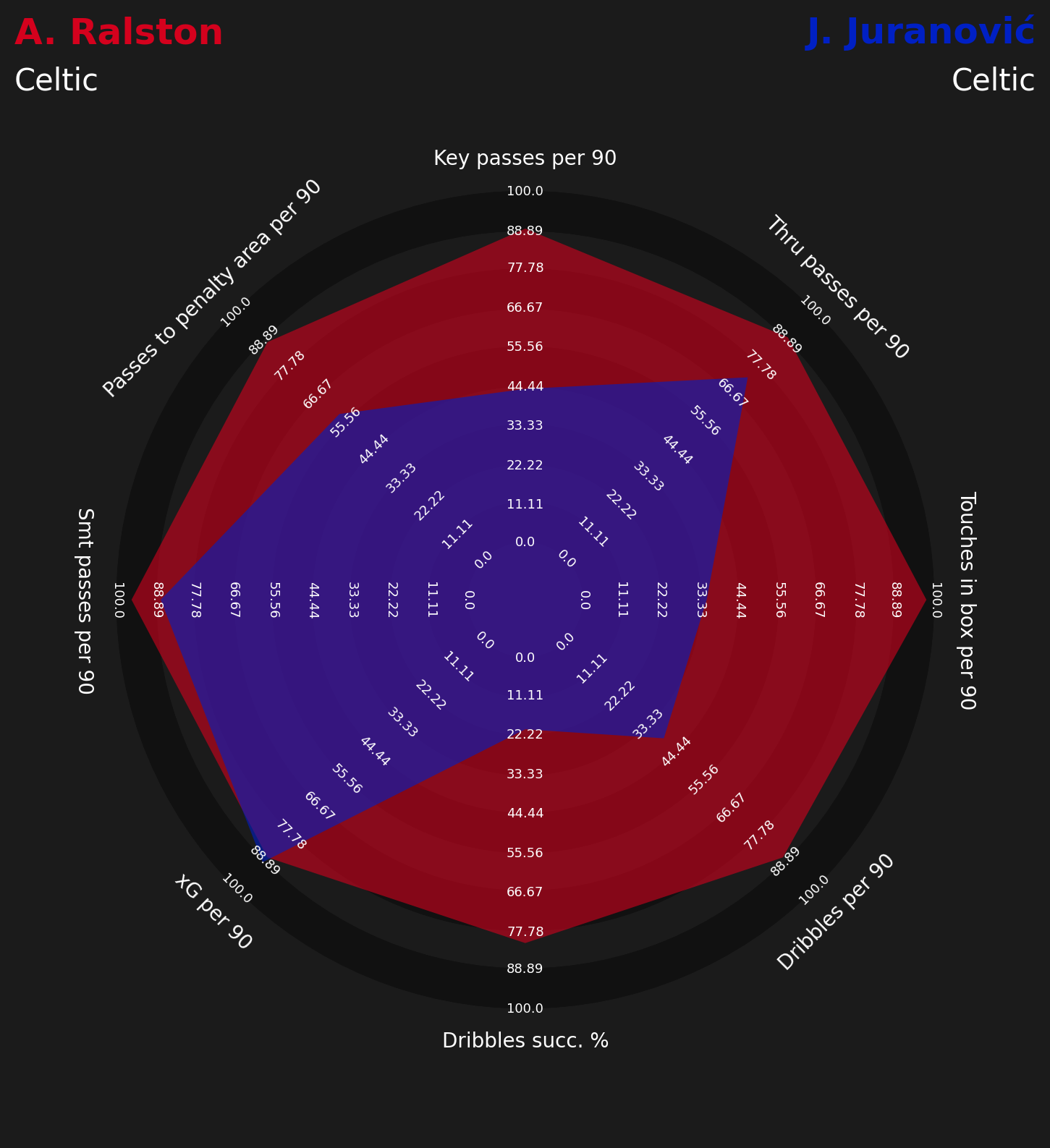 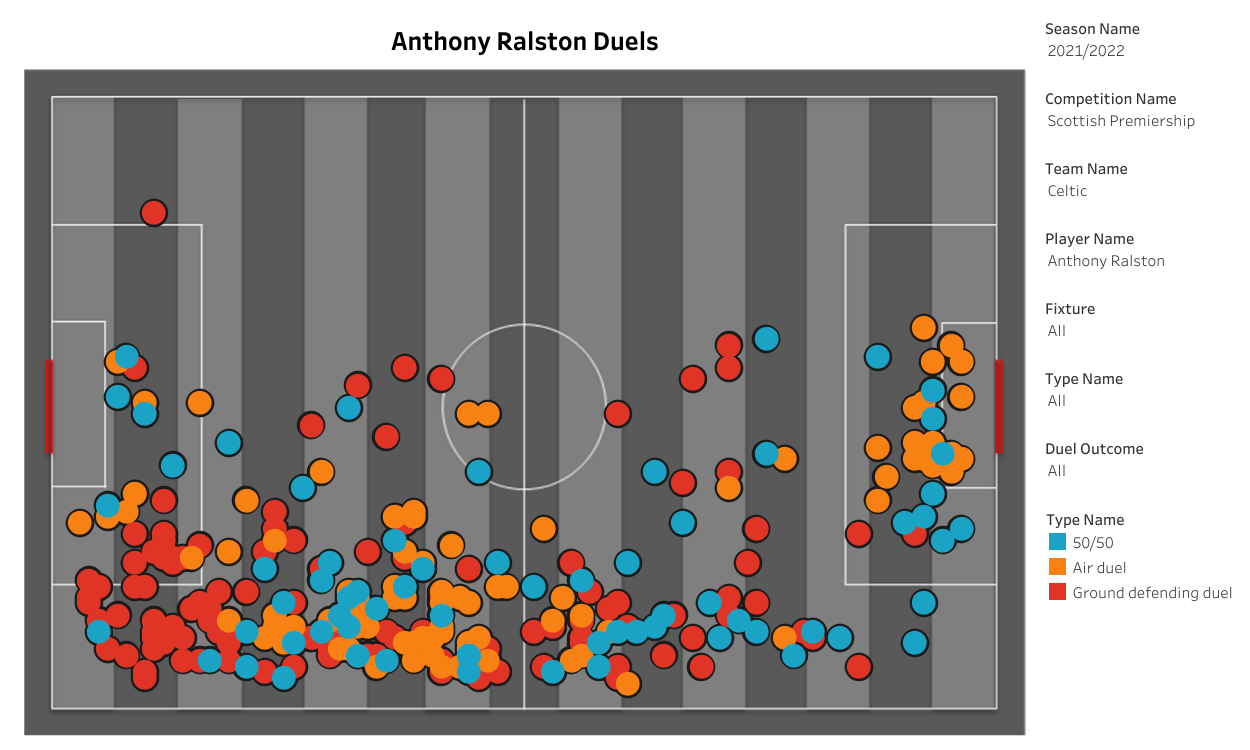 Ralston has attempted several duels on the right flank. The above visual indicates that Ralson has attempted more ground defending duels inside his half and has more loose ball duels in the opposition’s half. He tries to play higher up the pitch by winning the ball to start an immediate counterattack. 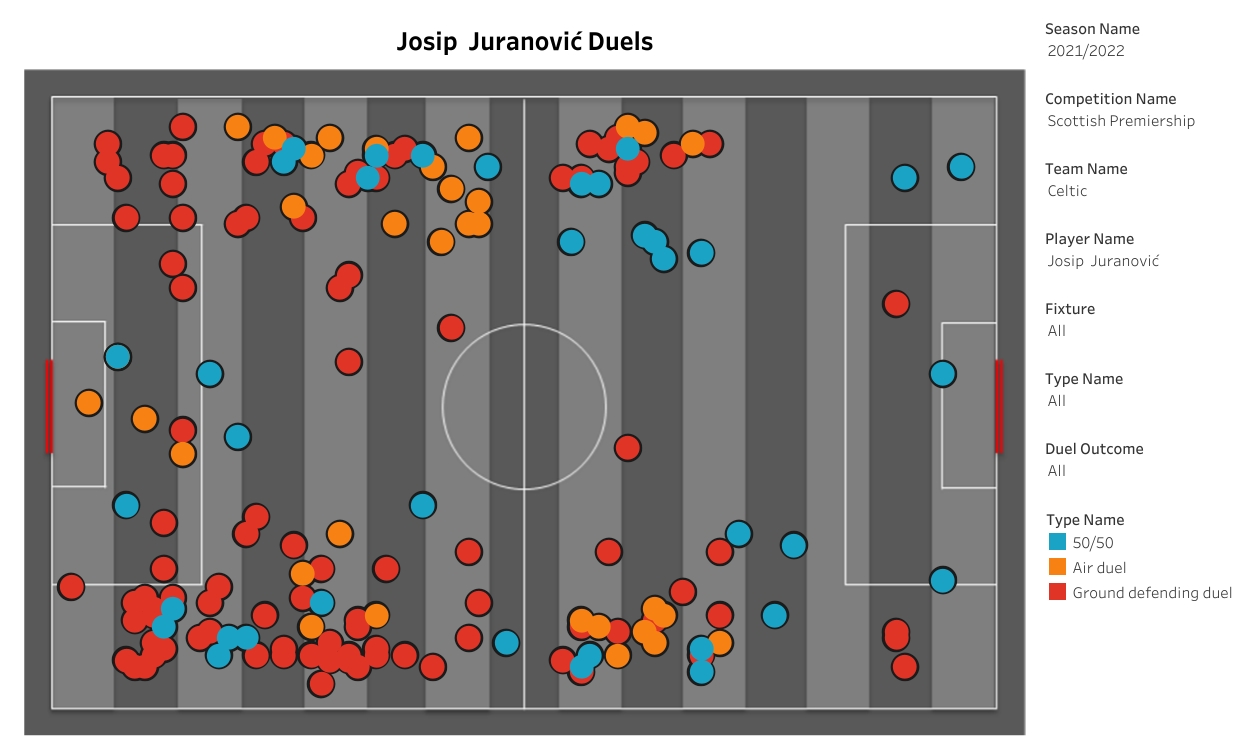 Juranovic has won most of the duels he has attempted on both sides of the pitch and is always able to recover possession of the ball for his team. He has attempted more ground defending duels in his half and more 50-50 challenges in the opposition’s half. If we compare the duel location visuals for both players, we can see that Ralston plays in a more advanced role for Celtic as he provides width on the flank in the attacking transition, but Juranovic provides more balance while defending.

Ralston has performed better than anyone expected, but that shouldn’t overshadow what is best for the Celtic’s starting XI. Juranovic is more gifted technically and offers more of what Postecoglou needs in his high-intensity system. He can win back the ball for his team and also helps to recycle the ball. Juranovic and Ralston are the two best full-backs that Postecoglou has in the squad and can use both full-backs depending on the opposition’s playing style.