Daizen Maeda was considered as Celtic’s marquee signing of January. The Japanese star had topped the J1 League scoring charts in 2021 despite not being an out-and-out striker and already had the experience of playing under the management of Ange Postecoglou from their time together at Yokohama F. Marinos. Since his arrival, there have been mixed reviews on how Maeda has played for Celtic so far and which position suits him the most. 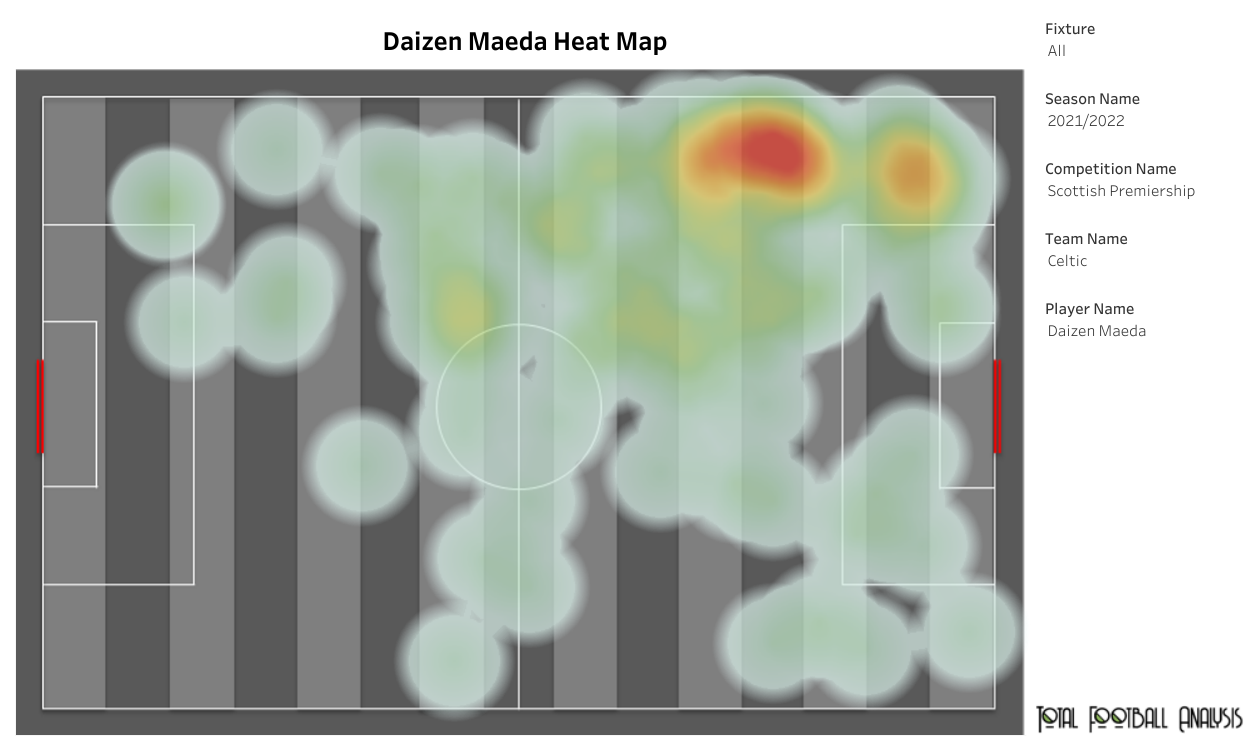 Though primarily and initially used by both Matsumoto Yamaga and Yokohama F. Marinos as a left-winger, Maeda can operate in several positions as a forward – including on the opposite flank, as an attacking midfielder, or occasionally a second striker. The above heat map shows us that Maeda has spent most of his time on the left flank, as that is his preferred position. But Maeda makes intelligent runs into the box behind the defenders.

Maeda constantly observes the opposition defenders, where they move to, and where he can pick up space. He is a thoughtful and intelligent footballer with a good awareness of the space the opposition offers. This helps him score goals with his head, and he has an impressive mix of left foot, right foot, and headed goals. 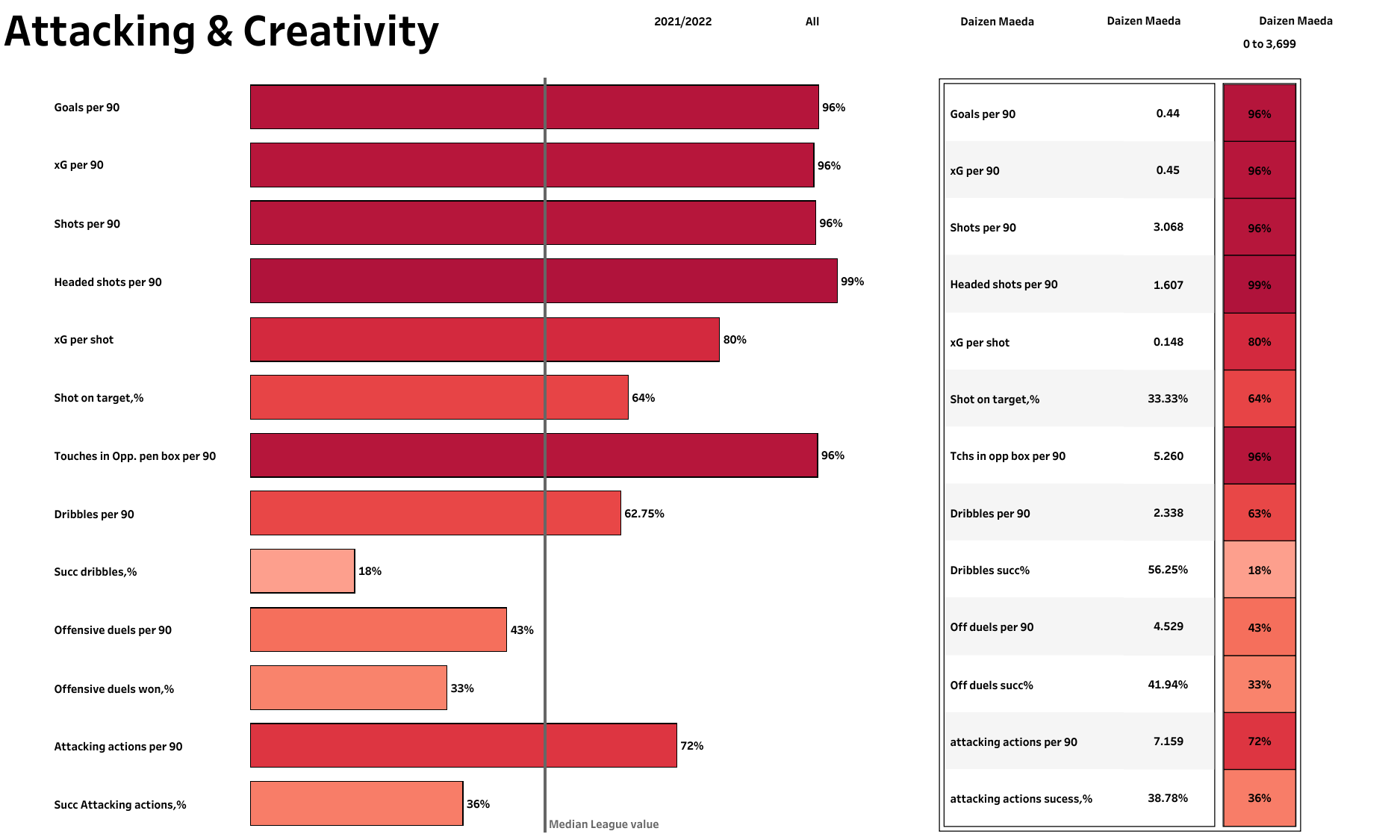 Maeda has scored five goals so far for the Bhoys in his 13 appearances in all competitions. The above visual shows us the attacking and creativity stats for Maeda since his arrival in the Scottish Premiership. The bars indicate that Maeda’s stats have been significantly better than the median league value, and he has performed well for his team. He averages 0.44 goals per 90 minutes and generates an xG of 0.45 per 90 minutes. He has attempted 3.068 shots per 90 minutes and also has 33.33% of his shots on target. Maeda ranks in the 96th percentile for the number of touches in the opposition box as he gets into good positions inside the box. He moves well off the ball, but when in possession, he is limited to utilizing his speed aggressively rather than getting past defenders with skillful dribbling. He has attempted only 2.338 dribbles per 90 minutes and has only completed half of these dribbles. This indicates why he has not been used on the wing as much and is better off playing centrally. 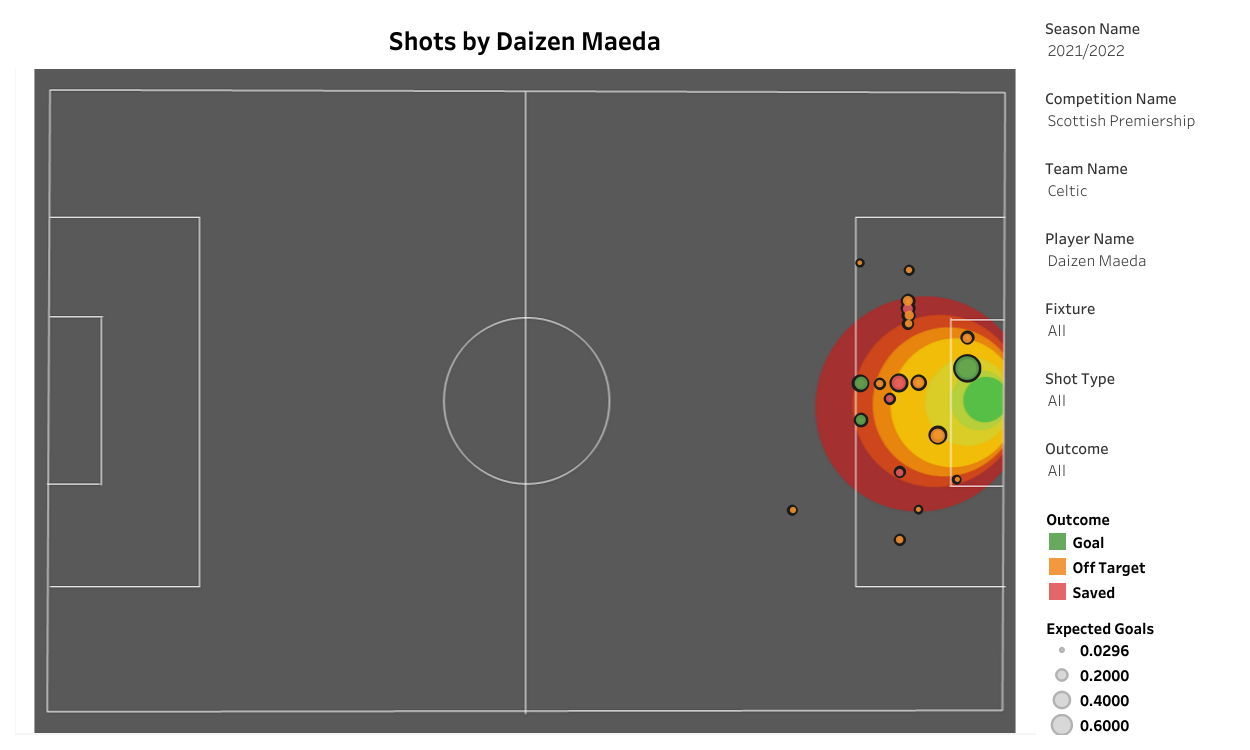 The above shot map indicates that almost all of Maeda’s shots on goal have been from positions inside the penalty area. He has had a total of 20 shots on goal and has had 33.33% of his shots on target. Despite being only 5 feet 8 inches, Maeda does manage to win aerial duels inside the box because of his intelligent runs and smart positioning inside the box.

Ange Postecoglou is trying him in different areas, and it has seemed to work for them.  Ange is still trying out different combinations with Maeda, playing him as a number nine or a wide forward. Maeda and Kyogo Furuhashi are still to play together, and the two of them playing as a front two could be a very lethal striker partnership. The more Maeda grows into his role at Celtic, the more effective he will become.