Celtic are once again in a difficult situation. Kyogo Furuhashi re-injured himself against St Johnstone on Boxing Day, and he is expected to be sidelined for some time. Albian Ajeti, on the other hand, was hurt back in December and is yet to return to the field. Japan’s national team has called up Daizen Maeda for the forthcoming World Cup qualifiers. As a result, Georgios Giakoumakis is currently the only striker available. Unfortunately for Celtic, since arriving at Parkhead in the summer, the Greek striker has struggled with both form and fitness. He did score against Alloa Athletic, but he wasn’t particularly impressive overall.

Celtic will be facing Hearts next in the Premiership and because it is an away match against an in-form team, it is likely to be extremely challenging. The Hoops will then host Dundee United before meeting Rangers at Parkhead in one of the season’s most critical games, which could have huge consequences for the title chase. Hopefully, the Greek international will continue to be fit in the future. Otherwise, the Hoops may have to revert to starting Liel Abada as their number nine. 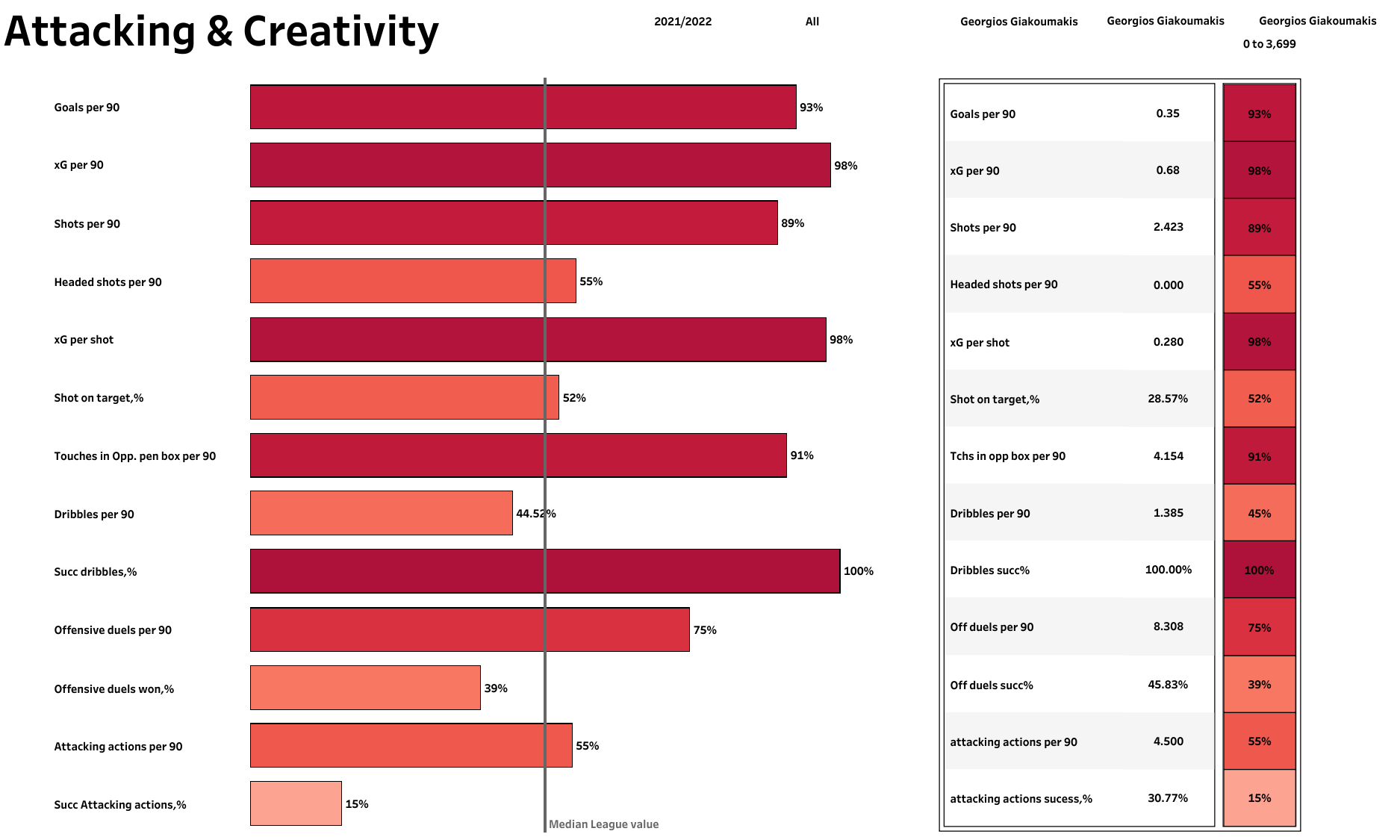 The above visual shows us the attacking and creativity stats for Giakoumakis from his six appearances in the Premiership. He has scored one goal so far in the league and scored another one in the League Cup last week. His stats indicate that he has had decent performances in the limited playing time that he has got this season. He can be a very strong figure in the opposition box. He has attempted 2.423 shots per 90 minutes and has had 28.57% of his shots on target. 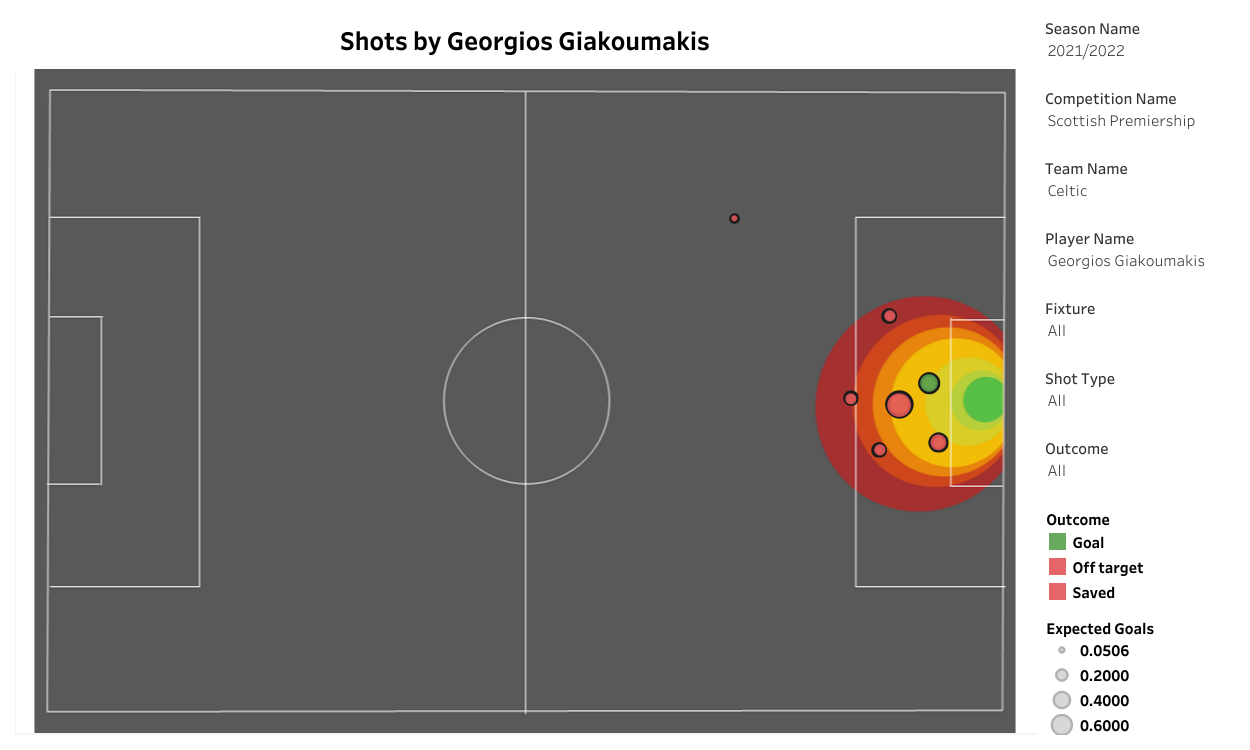 One of Giakoumakis’ significant strengths is his aerial presence. Moving into a goalscoring position is often supported by his aerial contribution. Being that efficient in attack is often a result of his success in aerial duels and hold-up play. He combines his positioning in the box and his aerial actions well, which makes him a perfect indirect set-piece threat. He has attempted seven shots in the league as he has played only 237 minutes, but most of these shots have been inside the penalty area. 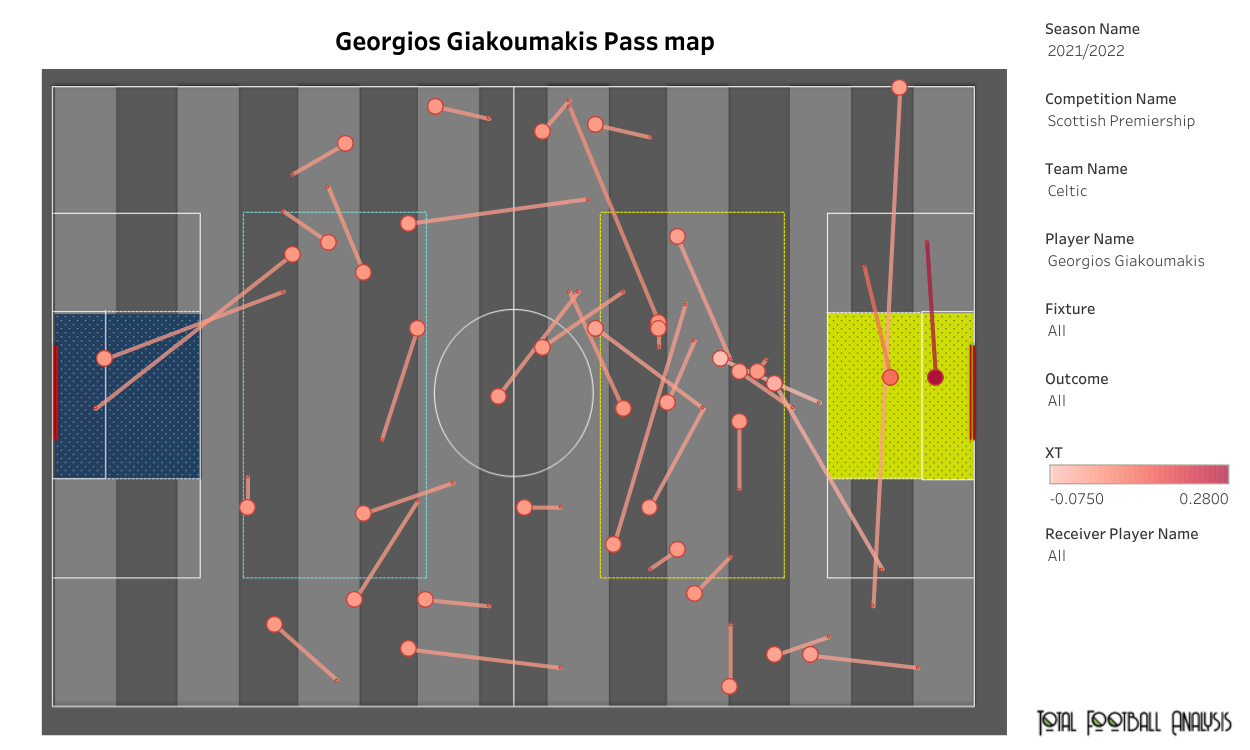 Giakoumakis doesn’t limit himself to moving in and around the box, despite being a centre-forward. He frequently drops to the halfway line to receive the ball and help with ball progression. Due to the team’s inclination to play with width, he can occupy the spaces in the wider areas, providing passing options on both sides. But it’s the central areas that he excels at exploiting so that he can move into a goal-scoring position. His off-the-ball movement helps the team breakthrough defenses by either taking on his markers or dragging them out of position, allowing him and his teammates to move freely. His pass map indicates how he has dropped deep near the halfway line to play short passes with his midfielders. In doing so, he drags one of the defenders with him, which gives space to his wide forwards to move inside to get into the pockets of space between the centre-back and full-backs.

Giakoumakis was the top scorer in the Eredivisie last season, and the fans will be hoping that he can rediscover his best form at Celtic as well. Celtic will need him to be at the top of his form in the coming weeks, especially with some big games on the way. Since he is the only striker left in the squad, his manager will completely trust him to lead the line against Hearts and will hope that he can have a positive impact on the game.