Georgios Giakoumakis scored another Parkhead hat-trick as Celtic moved six points clear at the top of the Premiership with a 4-0 rout of 10-man Ross County. The Greek striker had endured a difficult start to life in Scotland, spending several spells out on the sidelines due to injuries in the first half of the campaign.

Georgios Giakoumakis has been a shining star for Celtic in recent times, and it is easy to forget that only a few months ago, many people dismissed the Greek striker as a club transfer blunder. But, after the winter break, he has been brilliant. As a result, at this point, it’s difficult to imagine him being demoted to the bench unless he’s not physically fit enough to play.

Giakoumakis has scored 12 goals in 22 games for Celtic in all competitions. This is brilliant, keeping in mind that the striker failed to get any playing time at the start of the season due to injuries. However, later in December, Celtic’s first-choice striker Kyogo Furuhashi was injured. That was when manager, Ange Postecoglou, turned to Giakoumakis to feature as their number nine. 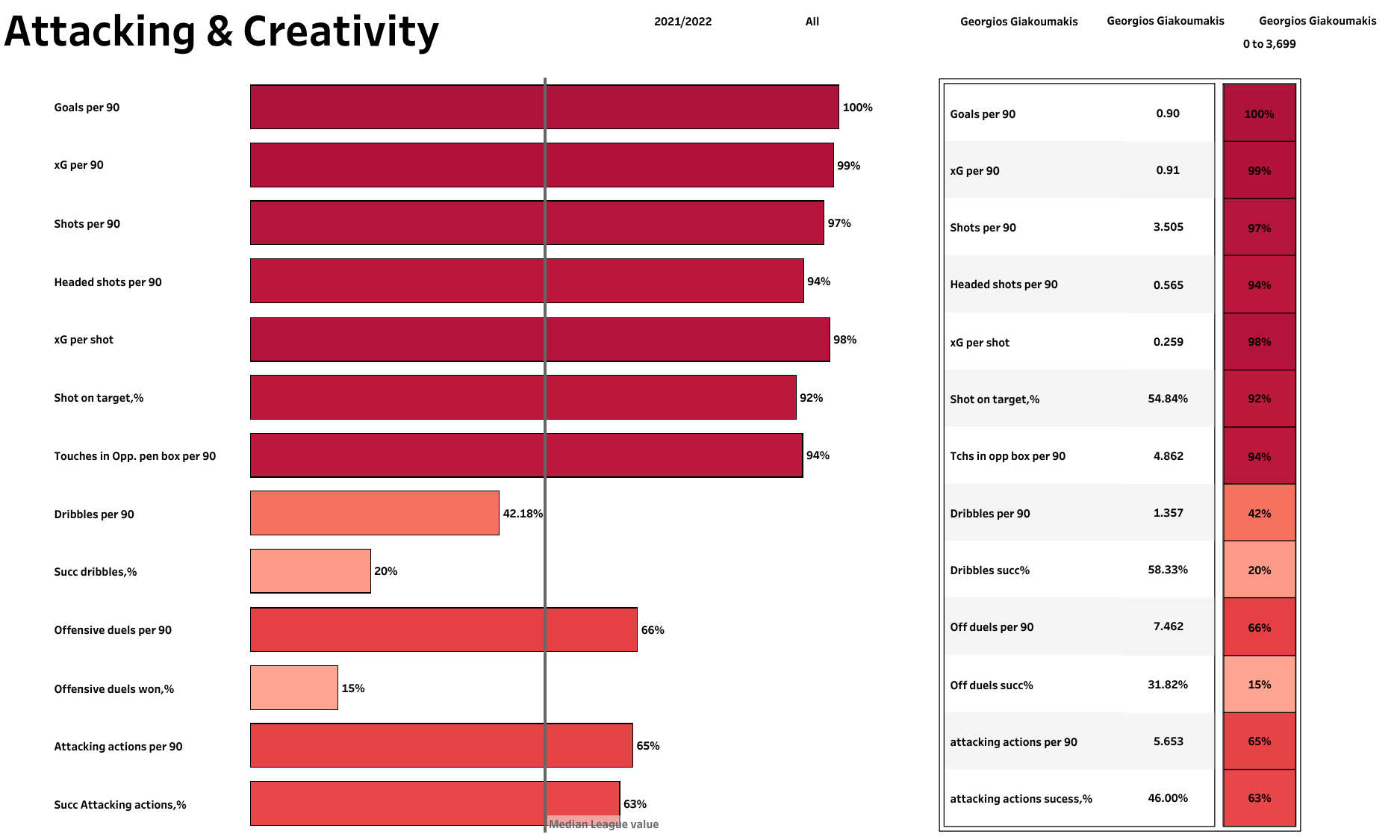 The above visual shows us the attacking and creativity stats for Giakoumakis from his 14 appearances in the Premiership. He has scored eight goals so far in the league and scored another four in the Scottish Cup. His stats indicate that he has had decent performances in the limited playing time that he has got this season. Most of his stats are significantly higher than the league median value. He ranks highly for xG per 90, shots per 90, and also shots on target. He has attempted 3.505 shots per 90 minutes and has been able to keep 55% of his shots on target. He can be a very strong figure in the opposition box. 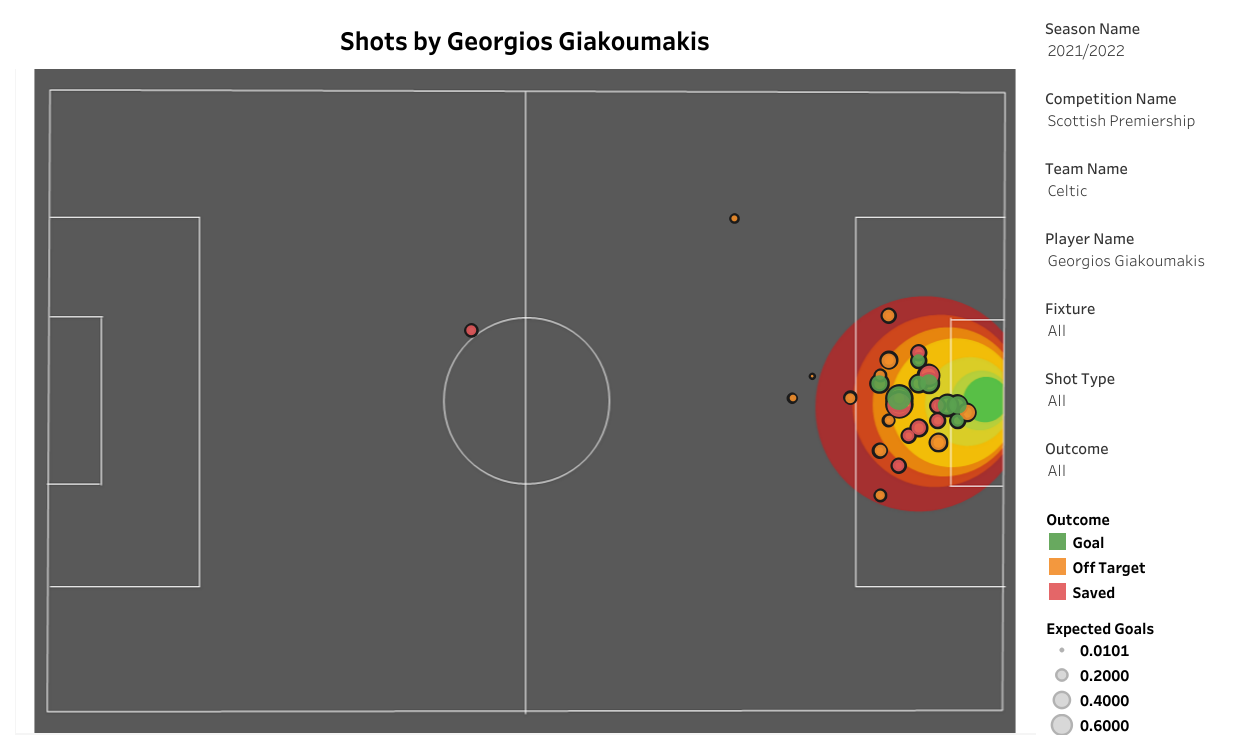 One of Giakoumakis’ significant strengths is his aerial presence. Moving into a goalscoring position is often supported by his aerial contribution. Being that efficient in attack is often a result of his success in aerial duels and hold-up play. He combines his positioning in the box and his aerial actions well, which makes him a perfect indirect set-piece threat. The above visual indicates that Giakoumakis has attempted the majority of his shots from inside the penalty area and has more than 50% of these shots on target. He is a poacher and is always on the move to slot home any second balls inside the box. 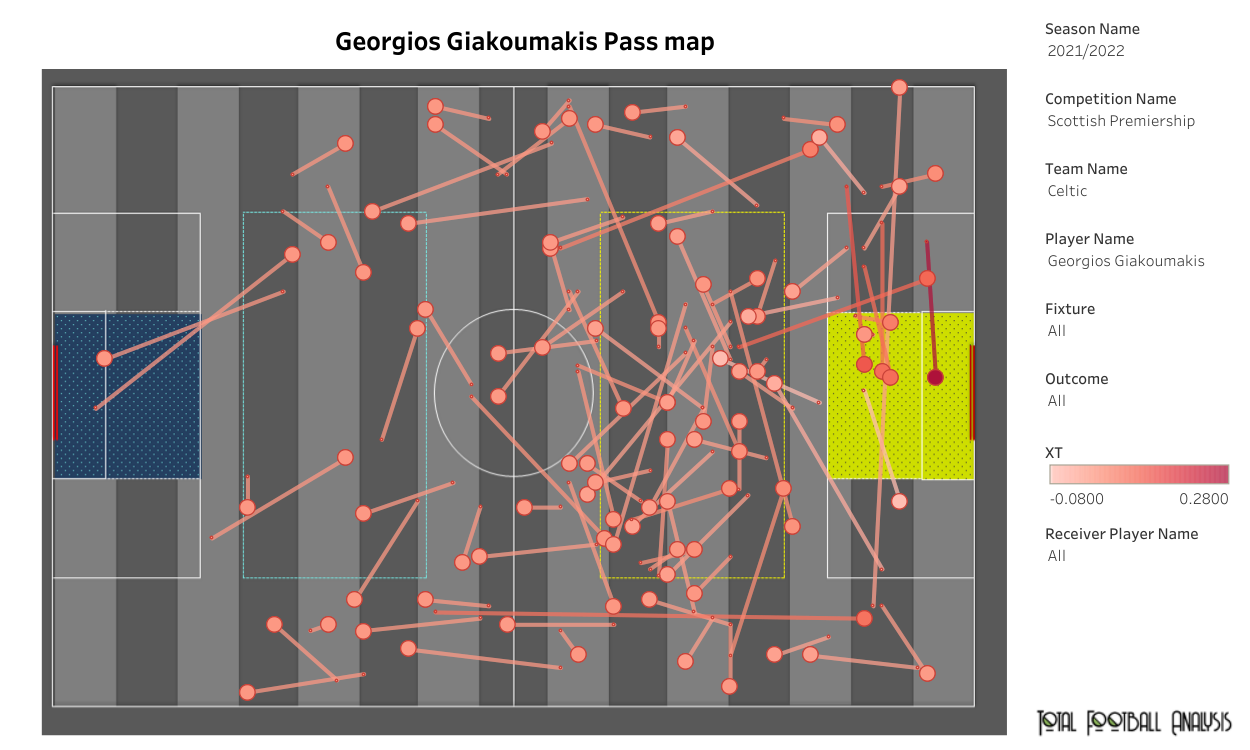 Giakoumakis doesn’t limit himself to moving in and around the box, despite being a centre-forward. He frequently drops to the halfway line to receive the ball and help with ball progression. Due to the team’s inclination to play with width, he can occupy the spaces in the wider areas, providing passing options on both sides. But it’s the central areas that he excels at exploiting so that he can move into a goal-scoring position. His off-the-ball movement helps the team break through defenses by either taking on his markers or dragging them out of position, allowing him and his teammates to move freely. His pass map indicates how he has dropped deep near the halfway line to play short passes with his midfielders. In doing so, he drags one of the defenders with him, which gives space to his wide forwards to move inside to get into the pockets of space between the centre-back and full-backs.

Giakoumakis is in brilliant form, and it is unlikely that Postecoglou will bench him to play Kyogo Furuhashi if he is declared fit for the Rangers game. Celtic have not lost a league game since a 0-1 defeat at Livingston in September and, with seven league matches remaining, are showing no signs of letting up, with their trip to Ibrox after the international break taking on even more importance.