When Celtic signed Giorgos Giakoumakis from Dutch club VVV Venlo on the deadline day of the 2021 summer transfer window, there were many who felt that he would take time to adapt to the Scottish game. However, he ended up as the joint highest goalscorer in the entire Scottish Premiership, along with Regan Charles-Cook of Ross County. The Greek forward will look to build on his solid start to his career in Scotland and help Celtic perform in both the Premiership as well as the UEFA Champions League. 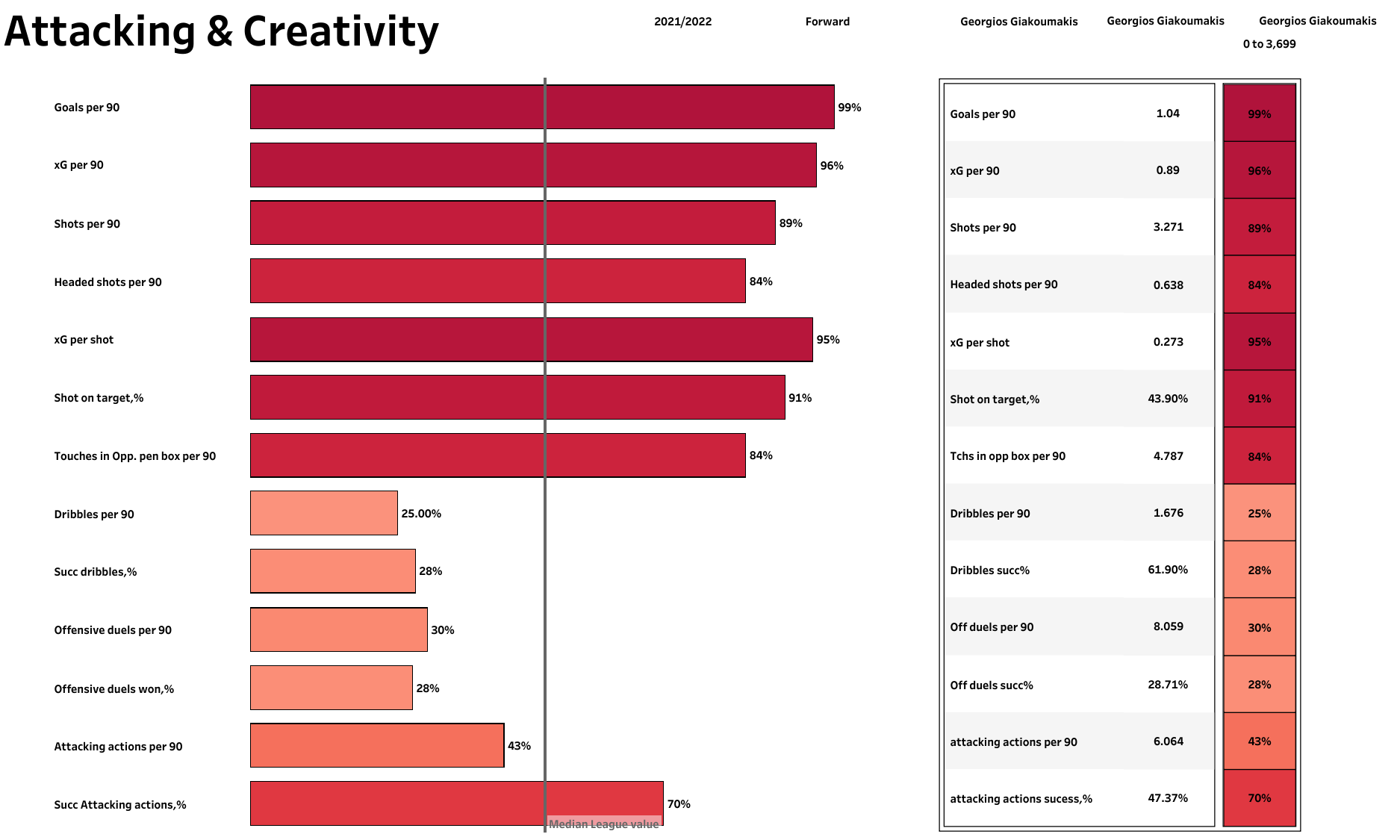 Giakoumakis appeared for Celtic in 21 Scottish Premiership games last season, of which 11 were starts. He scored 13 goals in the league and did so at a rate of 1.04 per 90, higher than the xG per 90 of 0.89. He took 3.27 shots per 90 and generated an enormous xG per shot of 0.273, the latter of which ranked him in the 95th percentile. The Greek hit a whopping 43.9% of his shots on target, which was enough for him to be in the top 9%. He also registered 4.79 touches in the attacking penalty area, good enough for the upper quintile. 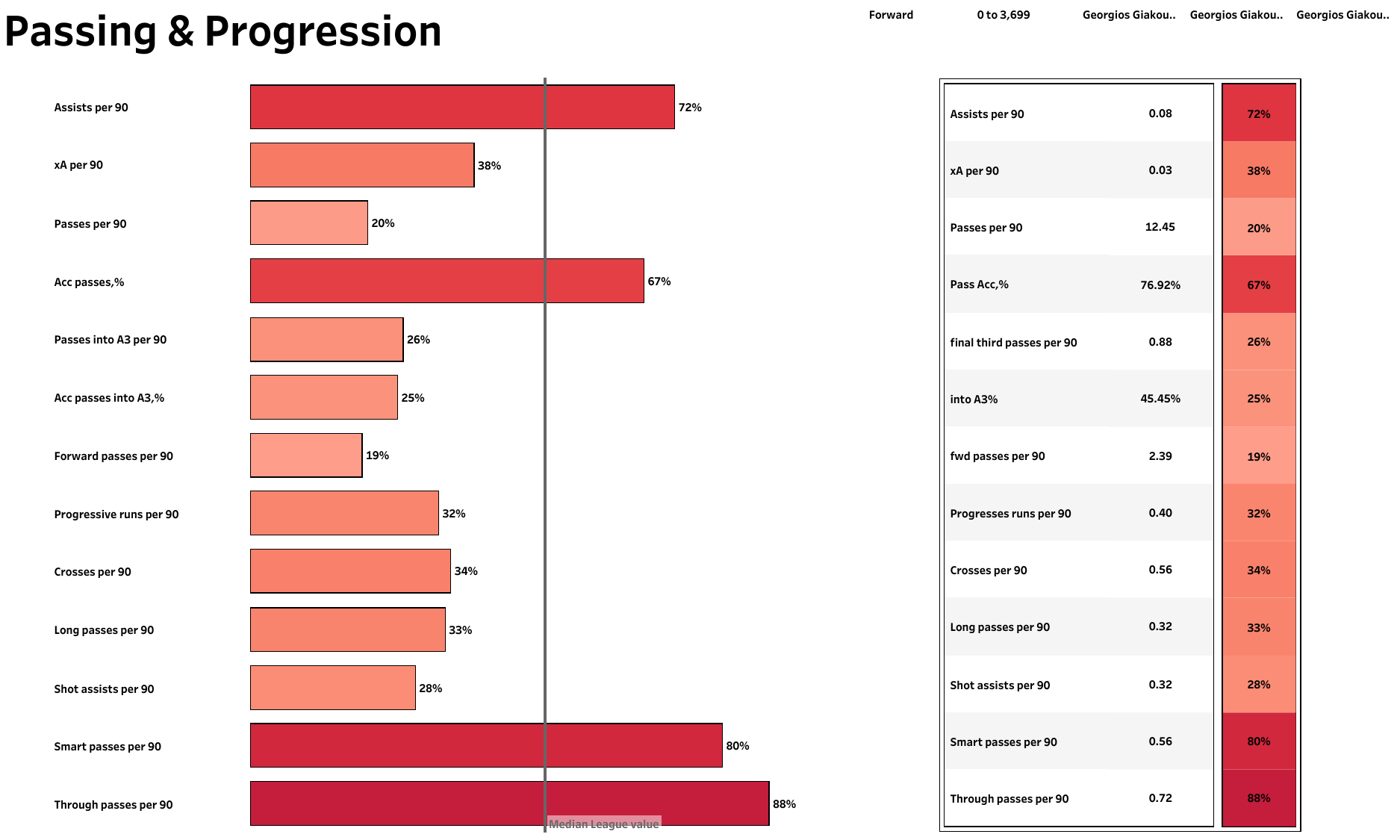 Giakoumakis provided one assist in addition to his 13 goals, which meant that he had a goal involvement every 76 minutes (he played 1,063 minutes). He was largely anonymous in the build-up play as he made only 12.5 pass attempts per 90 at an accuracy of 77%. He attempted less than one pass into the final third per 90, and the accuracy was far worse at just 45.45%. He made only 0.4 progressive runs per 90 and 0.32 shot assists per 90. But with 0.72 through passes per 90 to his name, the Greek player was placed in the top 12% among forwards. 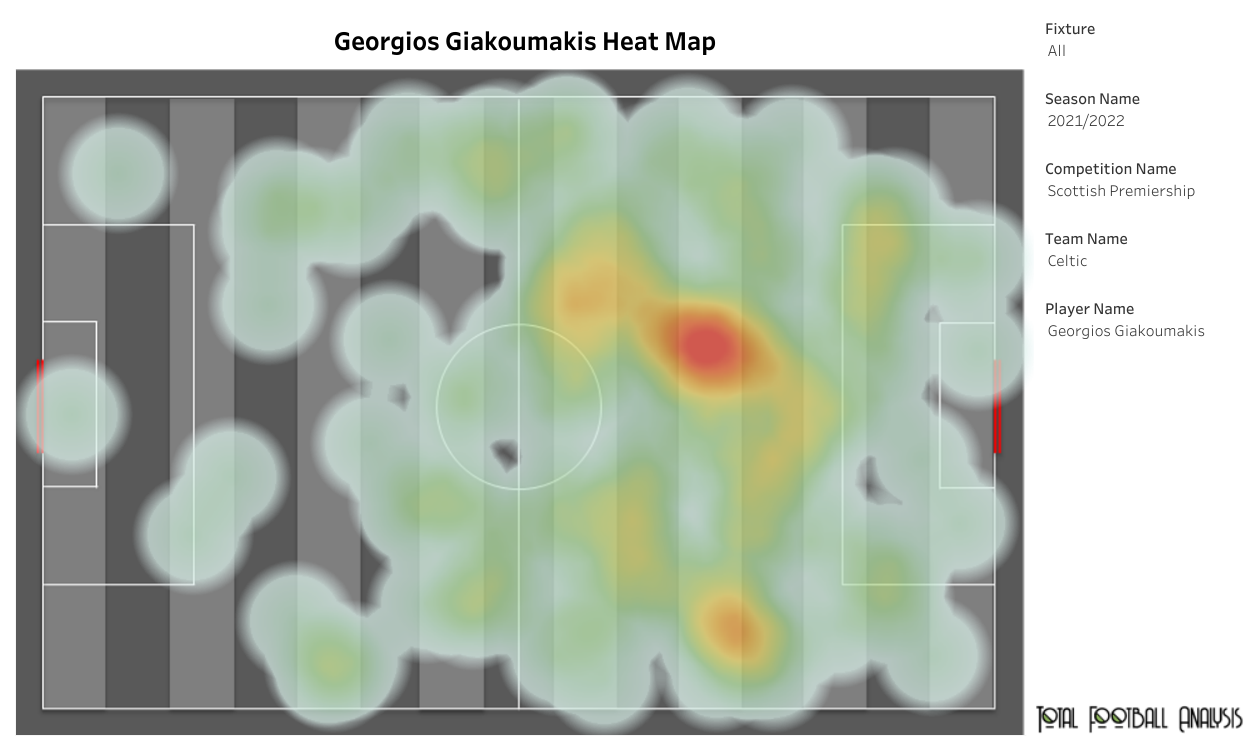 Giakoumakis was largely active in and around the oppositions’ penalty box. As a pure centre-forward, he often positioned himself in a way that he was just onside behind the last defender. Because he opted to focus only on the attack, he was a mere passenger in both build-up play as well as in defence, rarely attempting to close down his opponent.

To say that Giorgos Giakoumakis made the most of his limited game-time would be somewhat of an understatement as he guaranteed the team a goal or an assist once every 76 minutes. With Celtic competing in the UCL this season, he would be tested against far stronger oppositions.