Celtic have possibly the most important game of their season on Wednesday against Rangers. Ange Postecoglou’s side will know that they will need three points on the occasion if they are to keep up in the Premiership title race. In terms of the squad, Celtic are not in a great state right now. Key players like Kyogo Furuhashi, David Turnbull, Callum McGregor, Yosuke Ideguchi, and a few others are out injured. On the other hand, Daizen Maeda and Tom Rogic are away on international duty.

But, Celtic’s newest signing, Matt O’Riley, has impressed in his first two games for the Celts and has shown that he can be one of the important players who can make a difference for them. The 21-year-old midfielder has signed a ​​four-and-a-half-year deal with the Scottish Premiership side. Matt O’Riley has arrived from MK Dons recently and has already impressed on his Celtic debut, putting in an excellent performance against Hearts.

With seven goals and five assists to his name for MK Dons this season, O’Riley has been one of the standout players in League One. O’Riley can fill in for McGregor in the deep-lying role or potentially alongside Reo Hatate and slot in for Rogic as one of the two playmakers that Postecoglou favors. 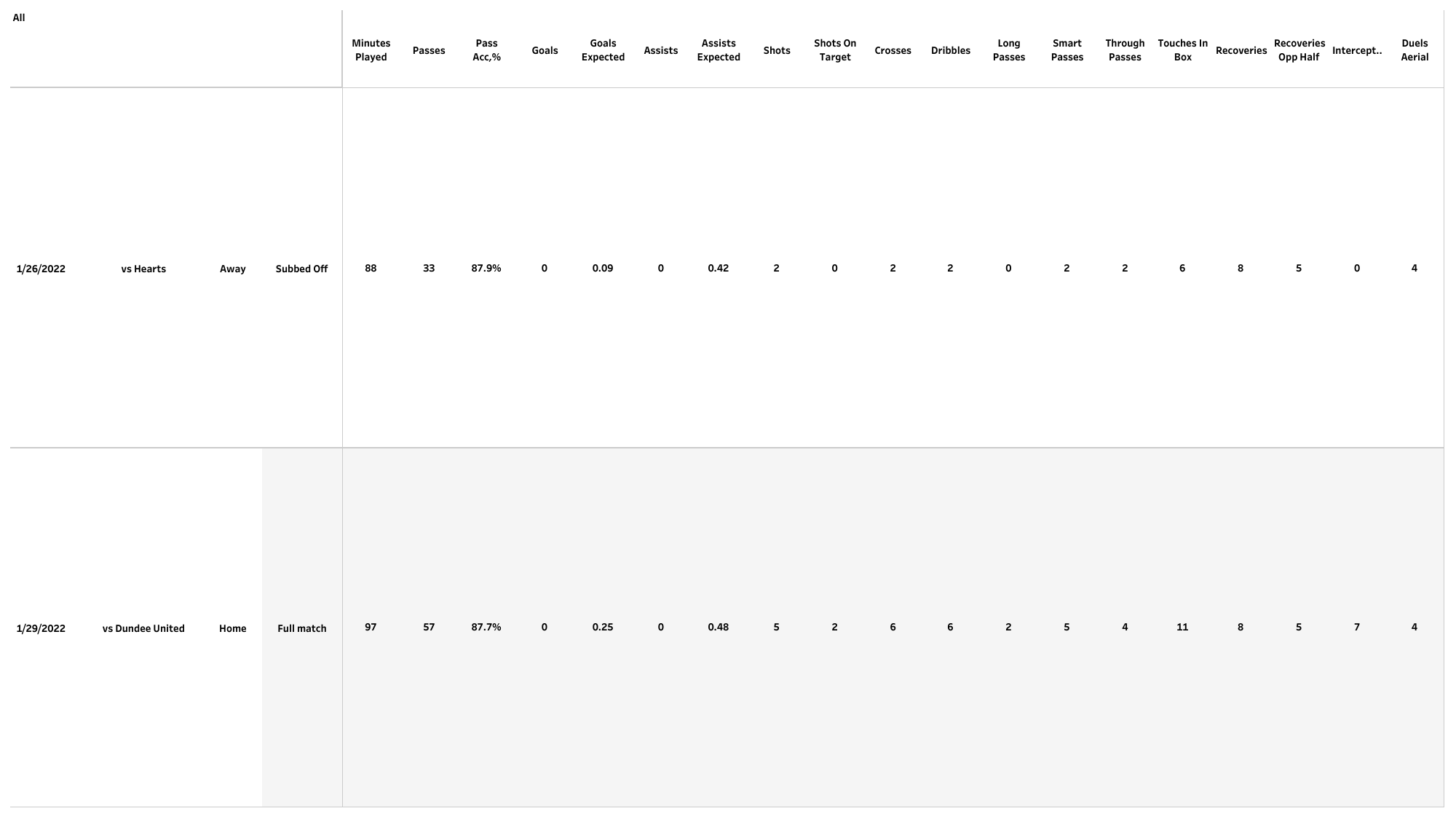 O’Riley had two amazing games against Hearts and Dundee United and has fit into Postecoglou’s system perfectly. He has been starting as a central midfielder and has put up impressive numbers so far. The youngster has had a pass accuracy rate of above 87% in both games and also registered an assist in the game against Hearts. 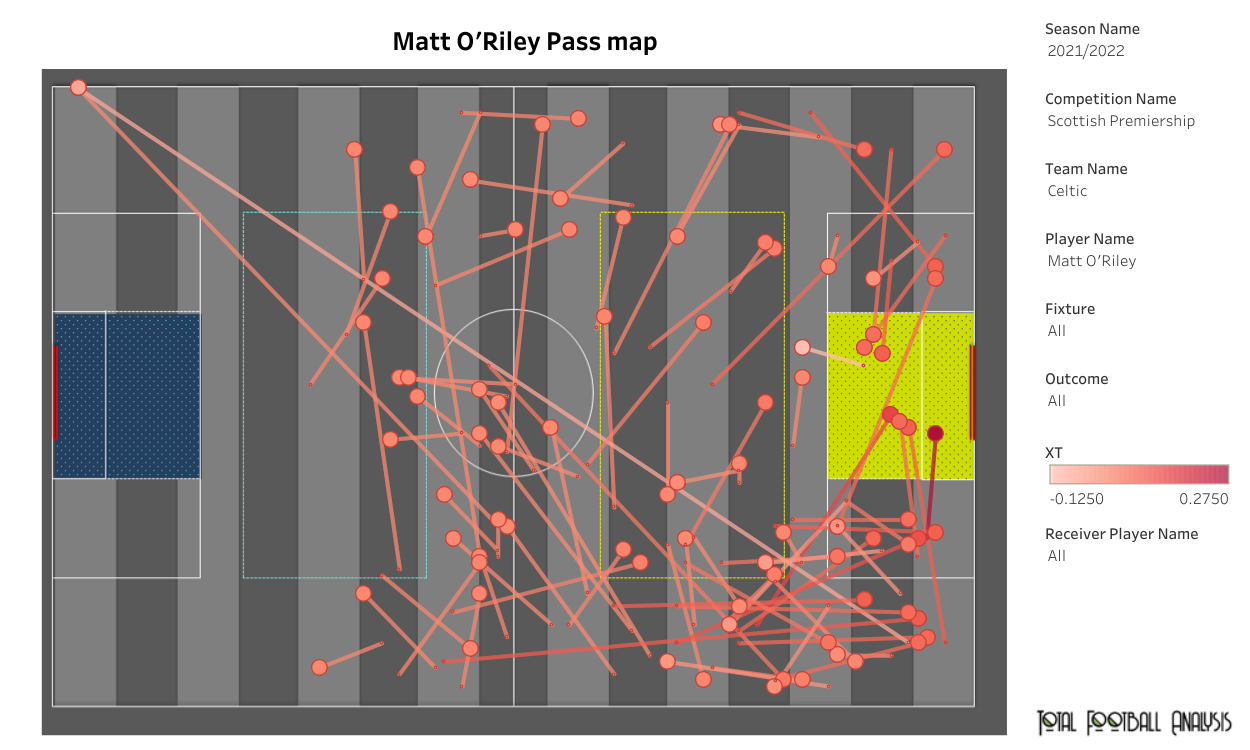 His pass map indicates that he drifts to the wider areas of the pitch to create space for himself as he has played most passes on the right side. He has a high xT from the passes he has played into the final third and had an expected assists value of 0.42 and 0.48 in his first two games, respectively. The pass map also indicates that he plays several short passes to keep possession of the ball and creates space after playing the pass. He played five short passes and six crosses in the game against Dundee United. He also attempted six dribbles, which helped him to get into threatening positions on the pitch. 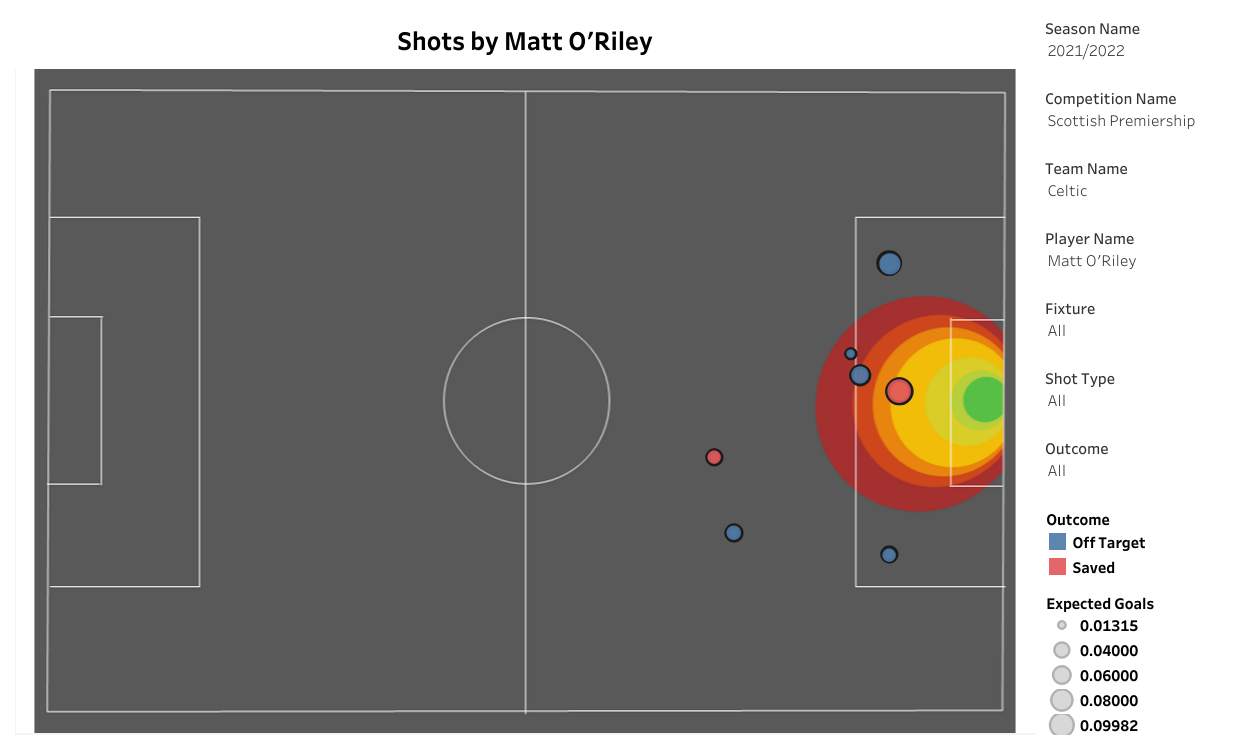 O’Riley attempted seven shots in his first two games. He attempted the most shots for his team against Dundee United and had two shots on target. He has generated an xG of 0.34. He has taken 17 touches inside the penalty area in two games, which indicates that he likes to move into the penalty area and also makes space to receive the ball. He has a huge presence in the final third and can be a threat to the opposition defense. 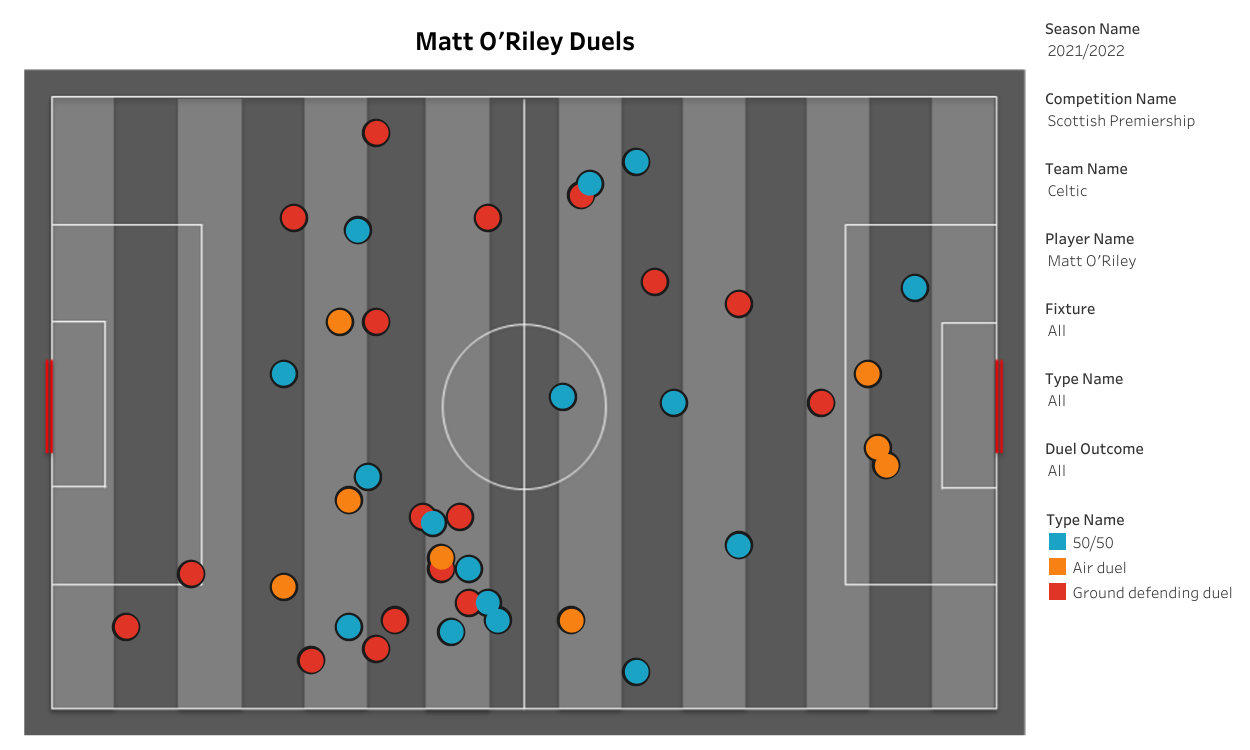 The above visual shows us the various duels O’Riley has attempted and the location of these duels. He was pressing high against Dundee United and showed good aggression when out of possession, as he managed to complete several interceptions, which stopped the ongoing attack. He made seven interceptions and also won four aerial duels.

The midfielder looks like an exciting prospect for Celtic. But he will have to make sure that he puts in a solid display against Rangers as well as the remaining games of the season. He has the potential to be Celtic’s new midfield ace, and if he can keep up his performances for the next few months, he can cement his place in the starting XI.