Celtic got an important 3-1 win against St Johnstone to head into the winter break on a positive note. The Hoops would have known that they needed all three points on this occasion, after dropping a couple in midweek when the club could only manage a 0-0 draw. A brace from Liel Abada and a rare goal from Nir Bitton got the job done here though.

And it is safe to say that it was not an easy thing to do, considering the number of players that the club was missing. But they got it done, which is what matters the most. Now they will head into the winter break, which should hopefully give them enough time to rest and recover and come back as a stronger team on the other side.

Postecoglou had some special praise for Nir Bitton for his performances against St Johnstone as well as the last couple of weeks. Not too long ago, it looked like Nir Bitton was not a big part of Postecoglou’s plans for the season. It is safe to say that he has turned things around significantly since then. The midfielder has already proven his worth in the middle of the park and also showed that he had something to offer going forward as well, scoring a rare goal against St Johnstone. 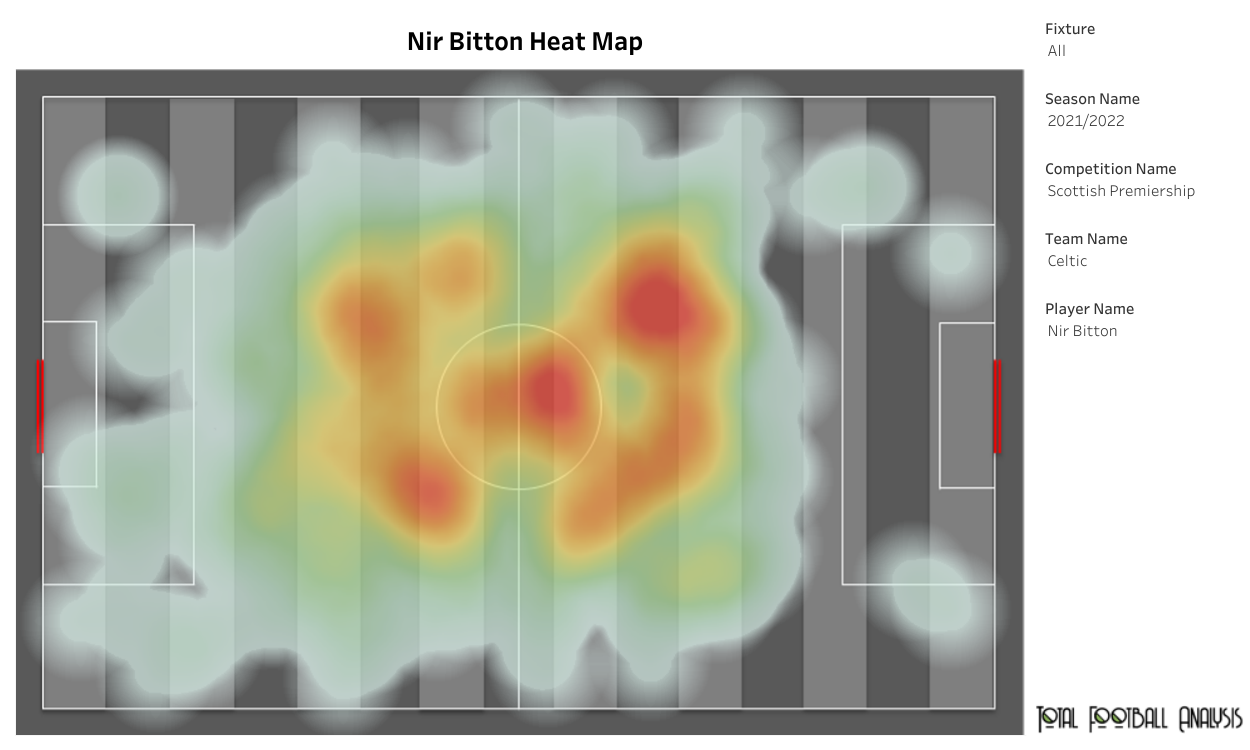 It may be hard to believe, but Nir Bitton has played for Celtic for over 8 years now, playing in 257 games. He has been utilized in a central defensive position several times, but it is his performances in his preferred midfield role that has drawn substantial recognition in recent weeks. Scott Brown and Callum McGregor had become Celtic’s regular midfield duo for several seasons, and with players such as David Turnbull of late, it’s easy to see how the Israel international slipped down the pecking order. As seen in the above visual, Bitton has been utilized in various positions in the midfield. 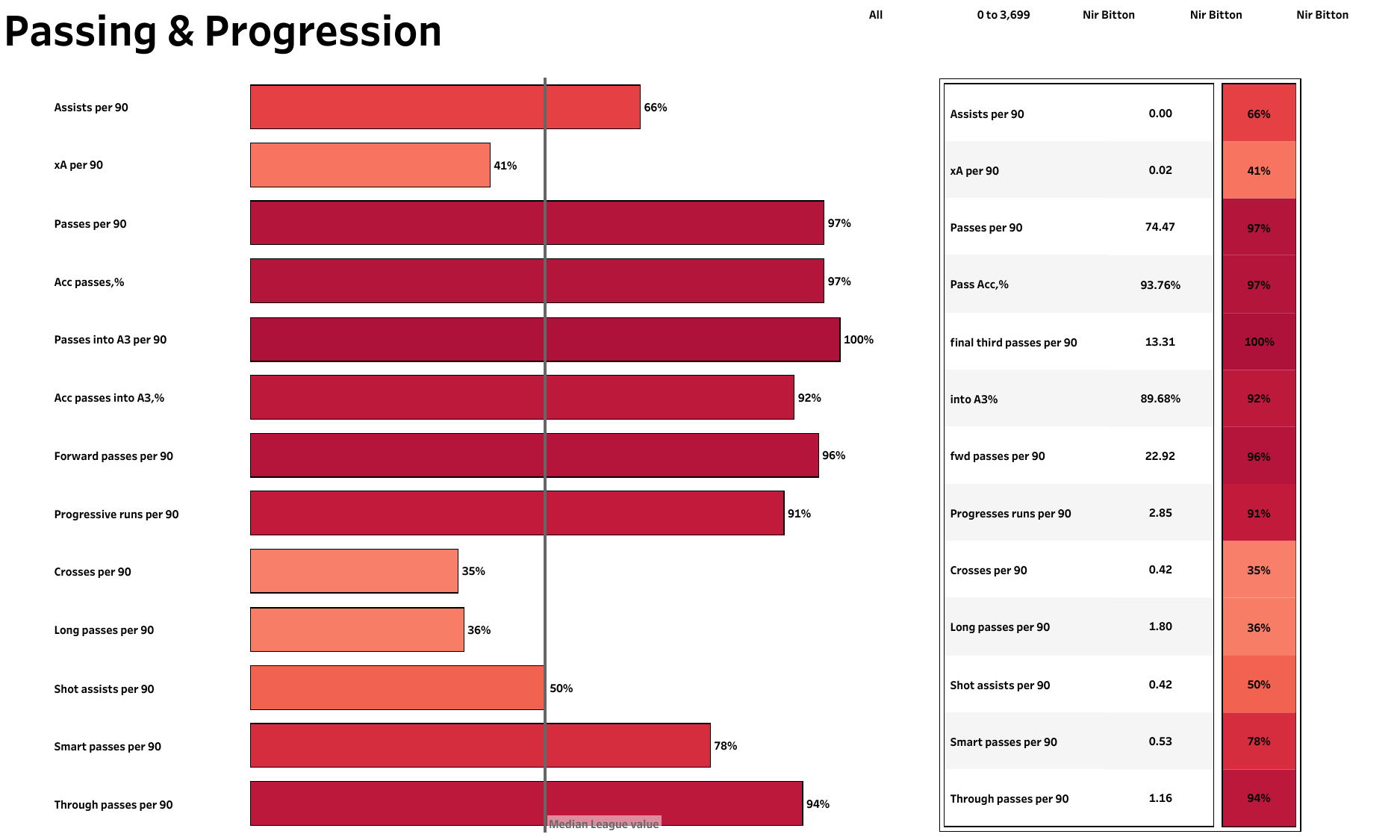 Bitton’s range of passing is perfect for Ange-ball, with the Israeli midfielder as comfortable pinging a cross-field pass as he is just keeping the play ticking over. Bitton possesses a wide range of passes and quality needed to break down the opposition defenses. The above visual shows us the passing and progression stats from this season. Bitton has attempted 74.47 passes per 90 minutes and has a very high pass accuracy of 93.76%. Most of his passing metrics are way better than the median league value for the same stats. He has played 22.92 forward passes per 90 minutes and has also made 2.85 progressive runs. 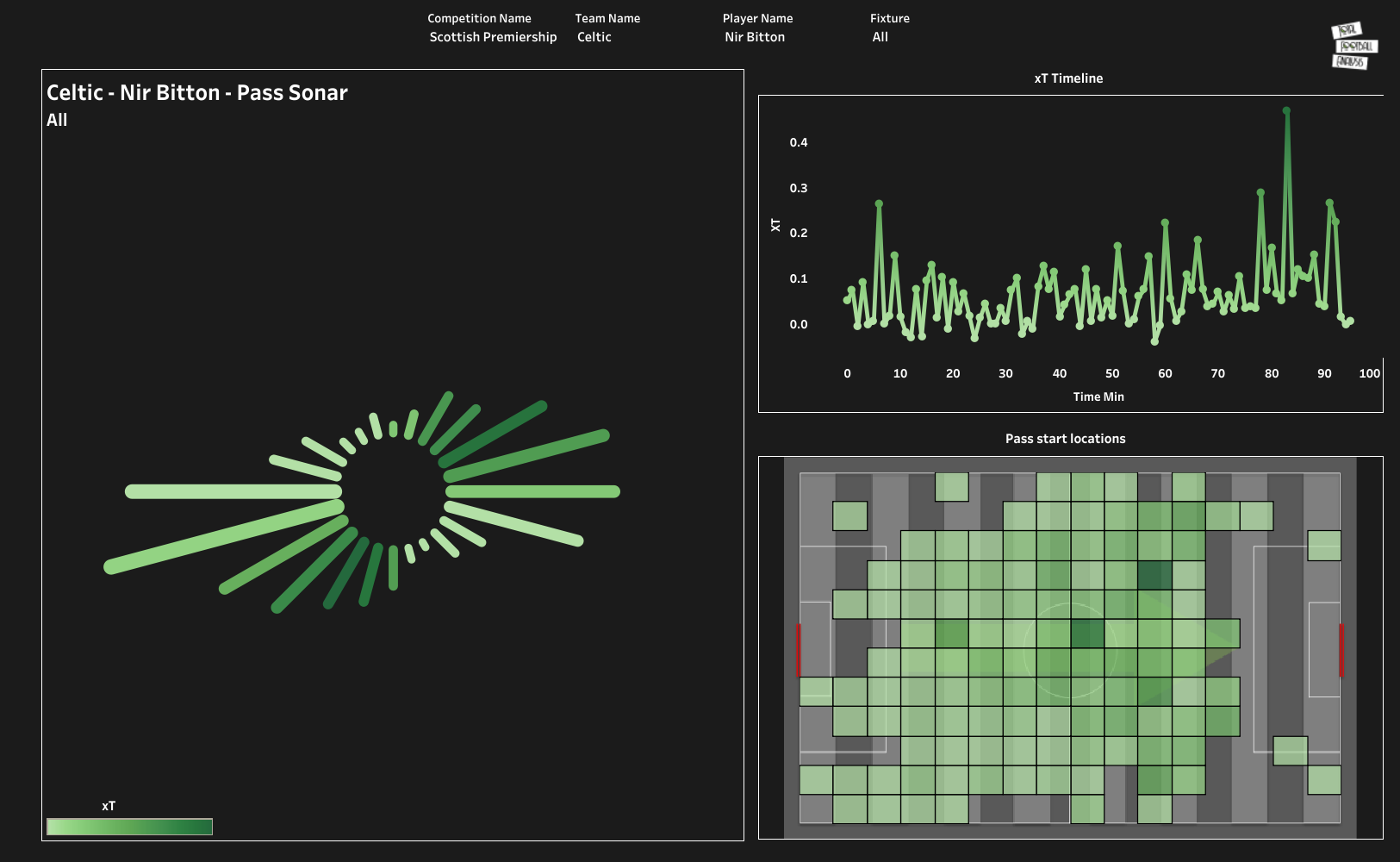 Playing in a deeper role, a position usually associated with chance creation from deep, Bitton attracts the attention of pressing attackers to free up space for the full-backs on either side of him. The pass sonar indicates that Bitton has played passes to different positions on the field playing from the midfield and also has a high xT from the through balls that he has played into the final third. 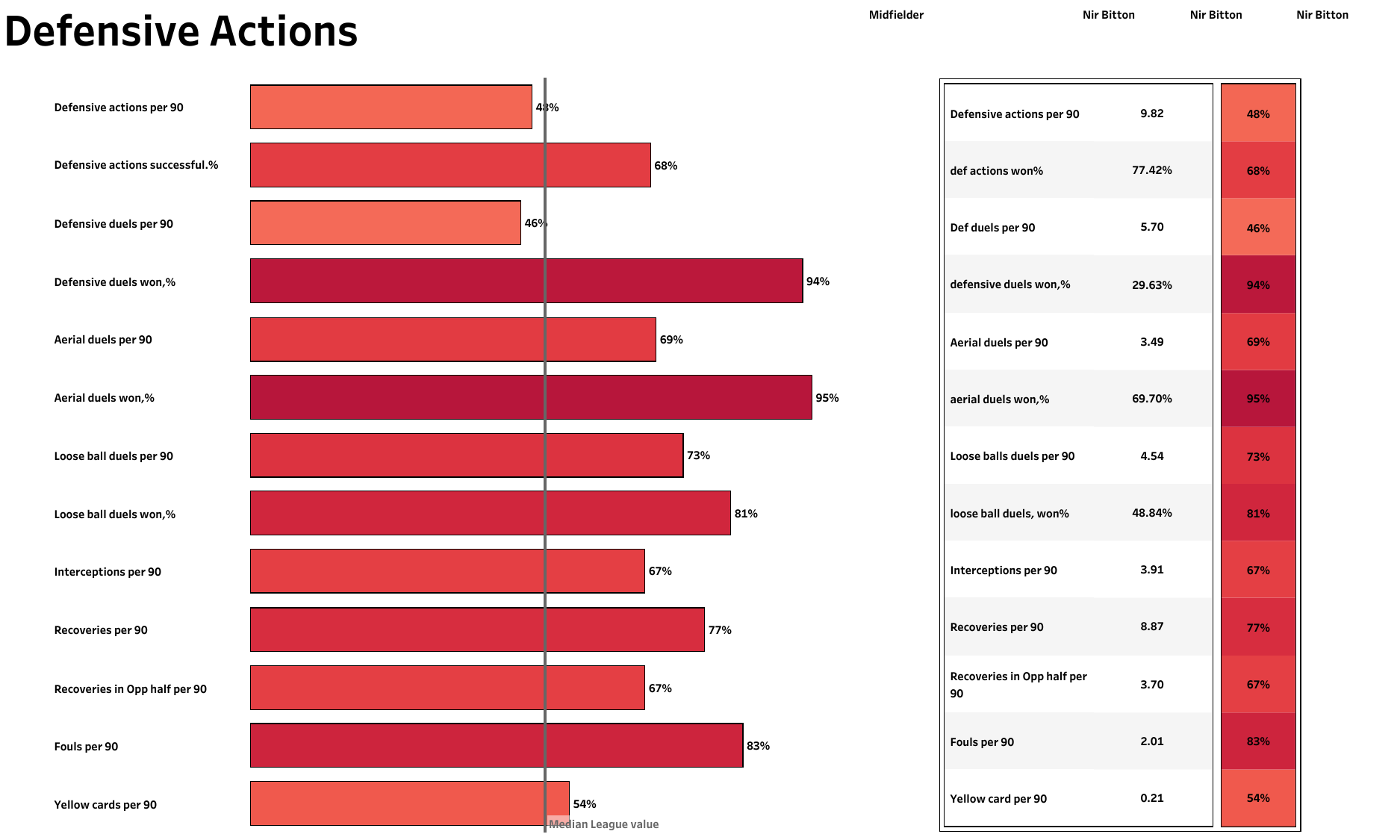 In many ways, Bitton has all the necessary traits needed to be a modern defensive midfielder. He is tactically disciplined and holds his position well, essential if Celtic are to get the best out of the attacking talents of David Turnbull and Tom Rogic. He has been impressive with the defensive and aerial duels he has attempted and has the highest numbers in those. He has been able to win 77.42% of the defensive actions he has attempted and can recover possession of the ball for his team.

Bitton’s physicality also facilitates a more combative midfield and addresses some of Celtic’s fragilities at set-pieces and crosses. He has a major role to play in the game by helping his defenders. As seen in the above visual, he has a number of interceptions in his half. Most of these interceptions have been when the other player is trying to carry the ball and also to stop passes from reaching their target.

Even when he has not played regularly, Bitton has always been a great option to have on the bench, whether it is helping out in defense or delivering a sense of calm to the midfield. Bitton finally appears to be back in the manager’s plans, and there could finally be a moment when the fans see his full potential in a Celtic jersey. Thus, it is safe to say that Bitton could prove to be a regular contributor for Celtic this season as he has shown tremendous improvement over the past couple of months.