The Scottish Premiership continues this weekend and will see Celtic host Dundee United at Celtic Park on Saturday. Celtic extended their unbeaten run to 12 matches across all competitions when they beat Hearts 2-1, while Dundee United ended a six-game losing streak in the Scottish Premiership when they came from behind to beat Ross County 2-1 on home soil in midweek.

The Celts sit second in the league table with 51 points from 22 games. They are four points behind rivals Rangers at the top of the table and will be looking to keep up the pressure with a win at the weekend.

Celtic beat Heart of Midlothian 2-1 in their last game via first-half goals from Reo Hatate and Georgios Giakoumakis. January signing, Reo Hatate opened the scoring with his first goal for the Hoops before Giakoumakis doubled the visitors’ lead 10 minutes before halftime. Liam Boyce gave Hearts hope of a comeback when he pulled one back in the 62nd minute, but Celtic managed to hold on for all three points. 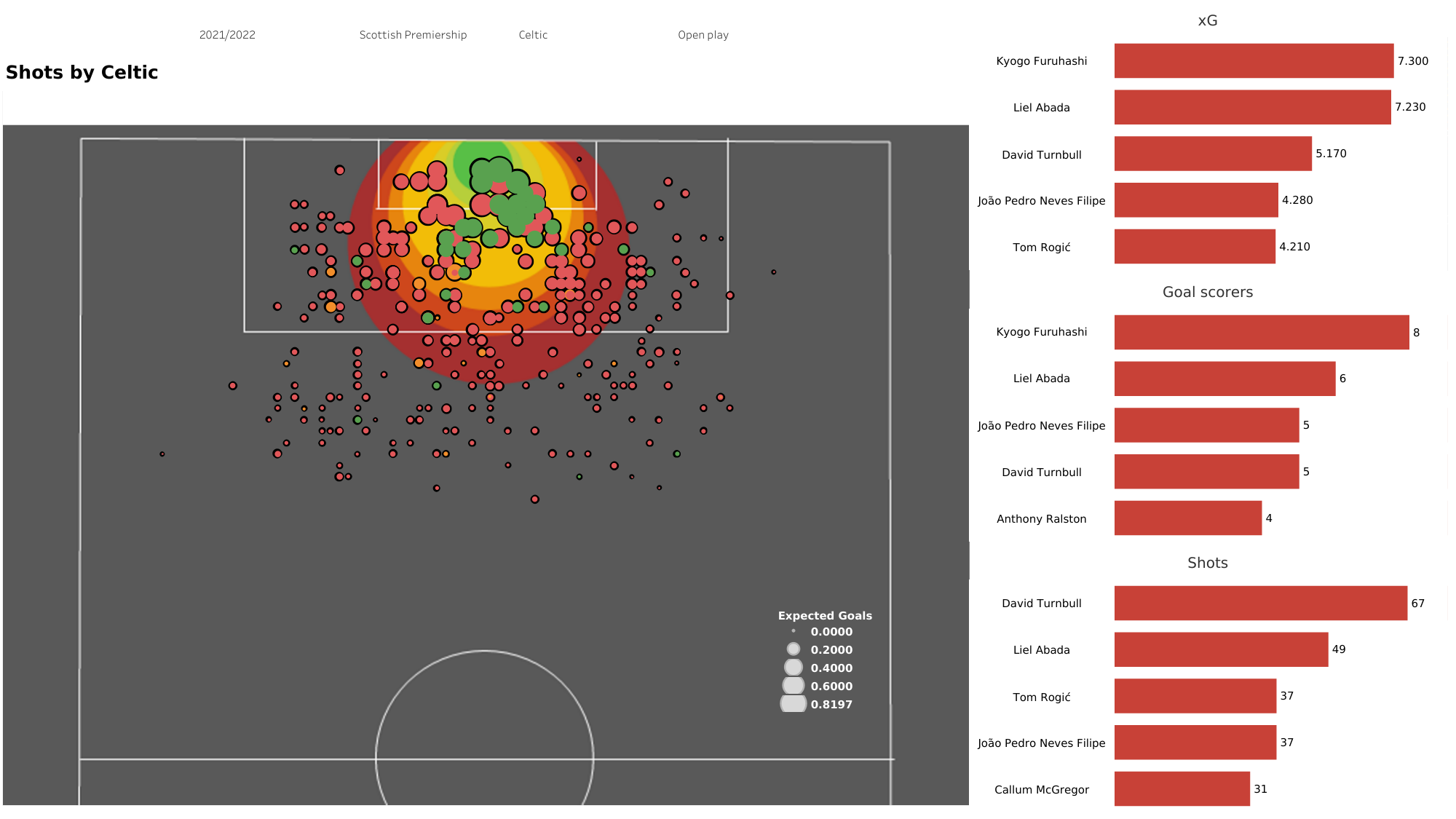 The above visual shows us the shot map for Celtic from the ongoing 2021-22 season. Celtic have scored the most goals this season and have been highly efficient in the final third. They have attempted 445 shots and have managed to keep 145 on target. Kyogo Furuhashi has generated the highest xG for Celtic and has also been their highest goal-scorer this season, but unfortunately, the striker is injured and won’t be a part of the squad. Liel Abada has also been impressive for Celtic as he has scored six goals so far this season from the 49 shots he has attempted on goal.

Celtic have also attempted the most smart passes in the league. Tom Rogic has attempted 31 smart passes so far for the Celts. Their newest signing, Reo Hatate, has been impressive in his two appearances for the club and created several chances against Hearts. He is a player who can find creative outlets for his team and has had a huge impact since he arrived in the squad.

Dundee United sit seventh in the Premiership standings with 28 points from 22 games. Dundee United completed a 2-1 comeback win over Ross County last time with second-half substitute, Nicky Clark, scoring a late brace. Regan Charles-Cook gave the visitors the lead eight minutes after the break, however, a brace from Nicky Clark helped the Tangerines claim all three points for the first time since mid-November. The win against Ross County ended a seven-game winless run in which they lost six on the bounce. 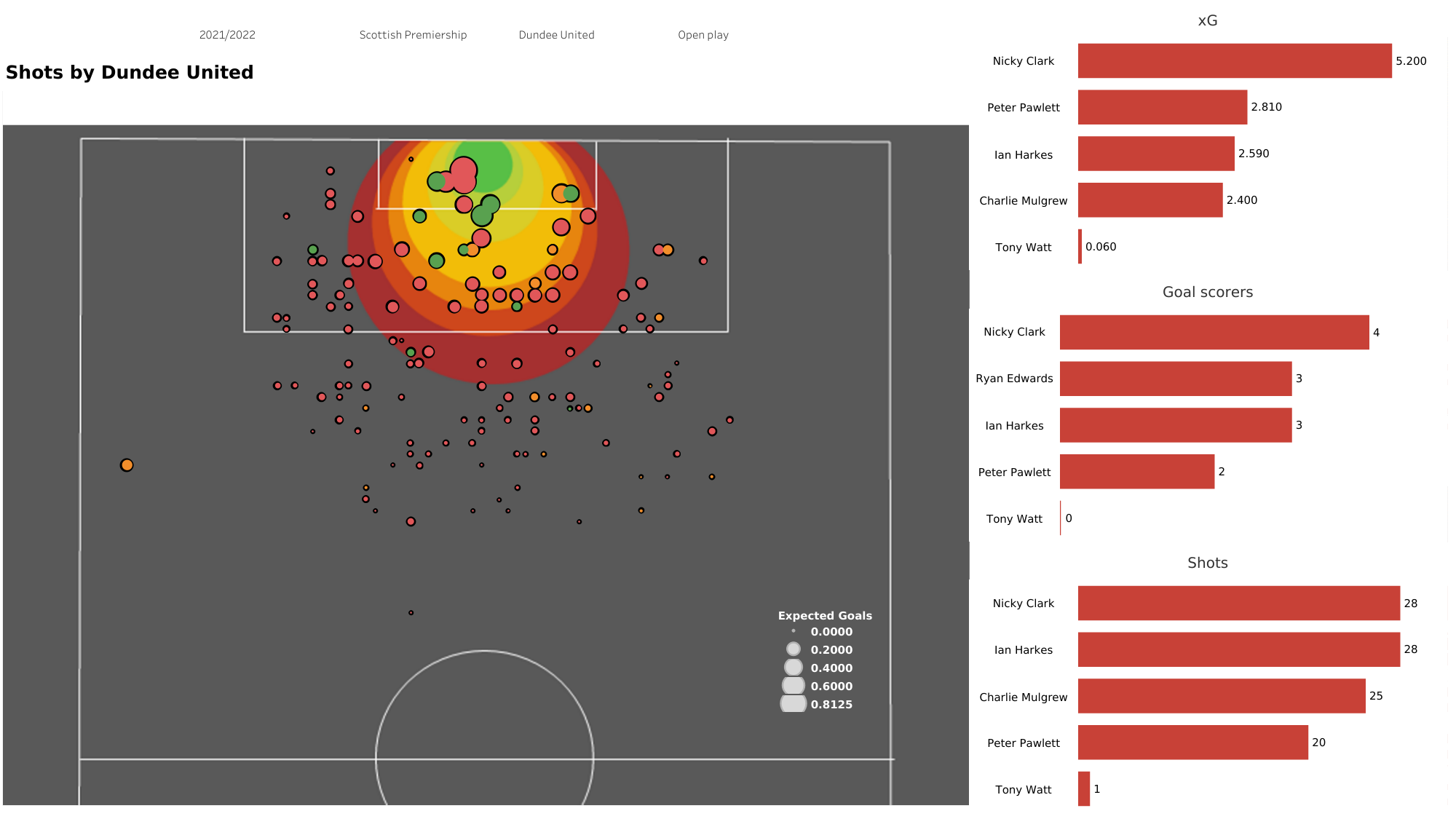 Dundee United have attempted a total of 224 shots on goal with 83 on target. Nicky Clark was Dundee United’s hero against Ross County, and he has also been their top scorer this season. Clark has attempted 1.566 shots per 90 minutes and has had a shot on target percentage of 35.71%. He has generated the highest overall xG so far and is a huge threat in the opposition’s penalty area.

Celtic will be looking to stay within touching distance of Scottish Premiership leaders, Rangers, by claiming all three points at home against Dundee United on Saturday afternoon.