Celtic got their title defence of the Scottish Premiership to a comfortable start with a 2-0 win over Aberdeen. Stephen Welsh fired the Hoops into an early lead before the Portuguese youngster, Jota, doubled the advantage with 15 minutes left at the end. 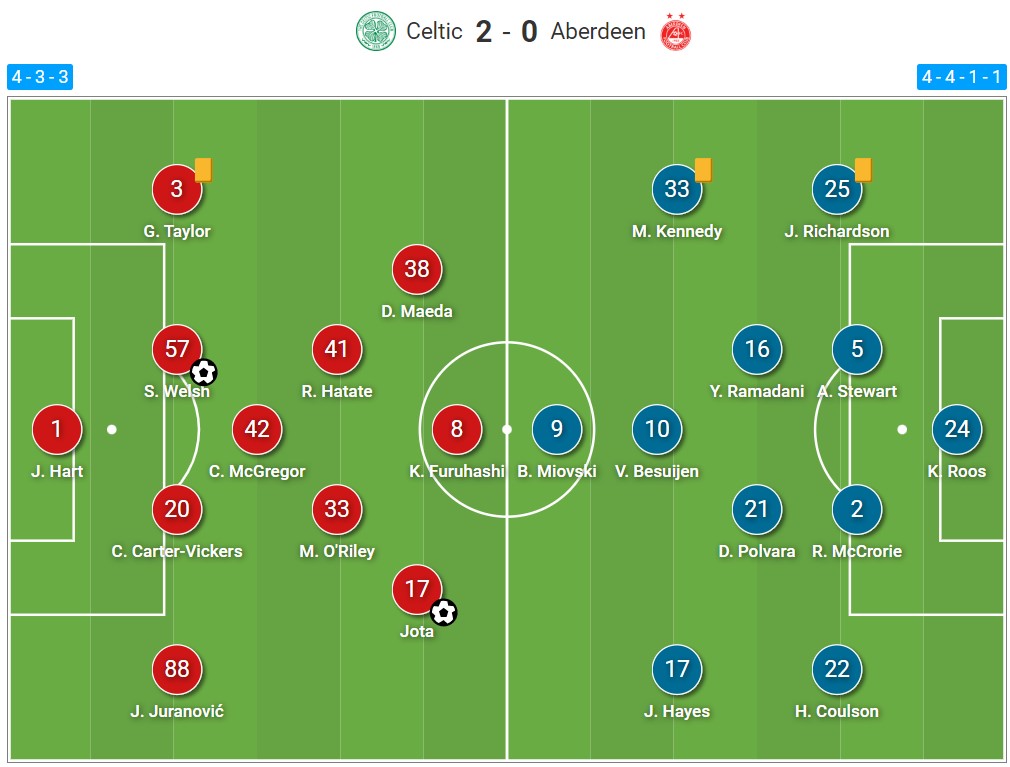 Celtic lined up in a narrow 4-3-3 formation for this match. The back four consisted of Josip Juranovic, Cameron Carter-Vickers, Stephen Welsh and Greg Taylor. Shielding the back four was captain Callum McGregor. Aberdeen opted for the 4-4-1-1 formation, which at times, resembled a 4-2-3-1. They went with a double pivot in midfield, with Albanian international Ylber Ramadani and Dante Polvara.

Celtic had the lion’s share of possession at nearly 65%. They made good use of it as they had an xG of 3.58 in this match. Yet, Ange Postecoglou’s side could score only twice.

The Hoops stuck with the 4-3-3 they started the game with. All five available substitutions were used by Postecoglou as he brought on Giorgos Giakoumakis, Liel Abada, David Turnbull, Anthony Ralston and Aaron Mooy. 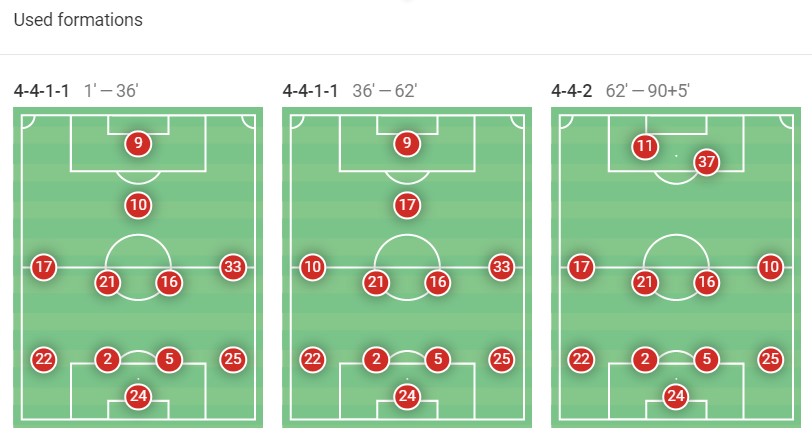 Celtic hit nine shots on target out of 22 in this match. The opening goal by Stephen Welsh was headed into the bottom-left corner. The second goal from Jota was a thunderbolt strike from nearly 25 metres out, and it went into the top left corner.

Aberdeen were limited to just six shots throughout the match, of which two tested the Celtic goalkeeper, Joe Hart. The shot with the highest xG was 0.15 when Hayes’ attempt went just wide of the post in the 38th minute. 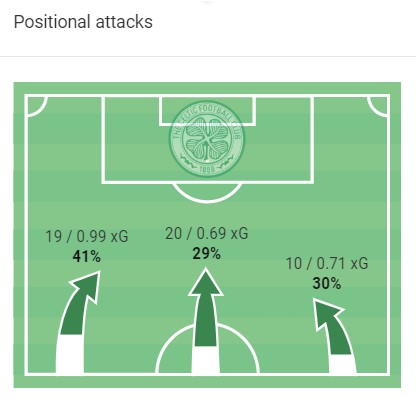 Celtic had 49 positional attacks, of which 15 generated shots. The highest xG came through the left-hand side of the pitch, but it was generally high in the centre as well as on the right. 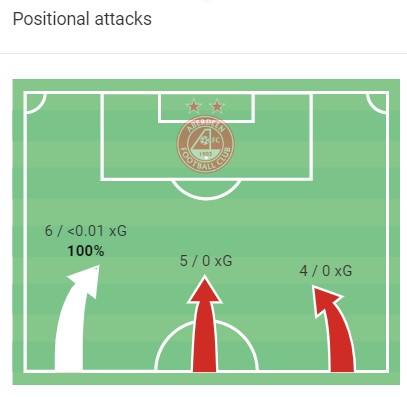 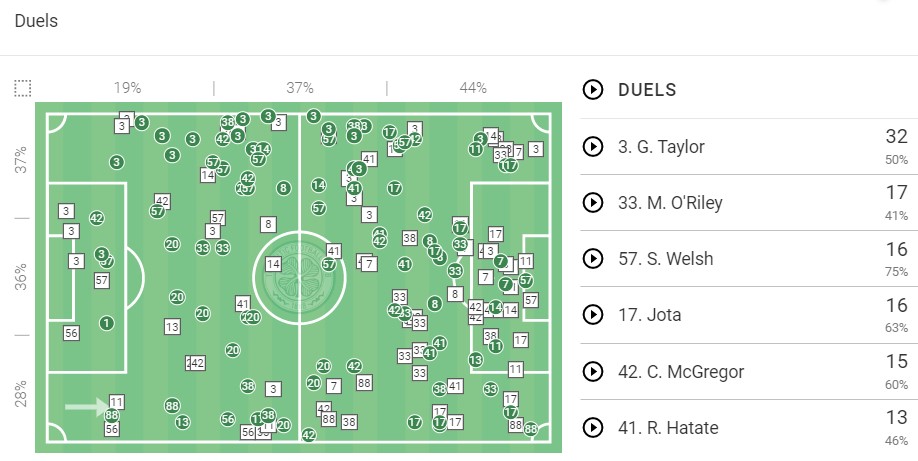 Celtic won 99 out of 192 duels in this game, giving them a win rate of 51.56%. Most of these duels were contested in the final third, with a sizeable portion coming in the midfield. Greg Taylor won 16 duels, followed by Stephen Welsh with 12. 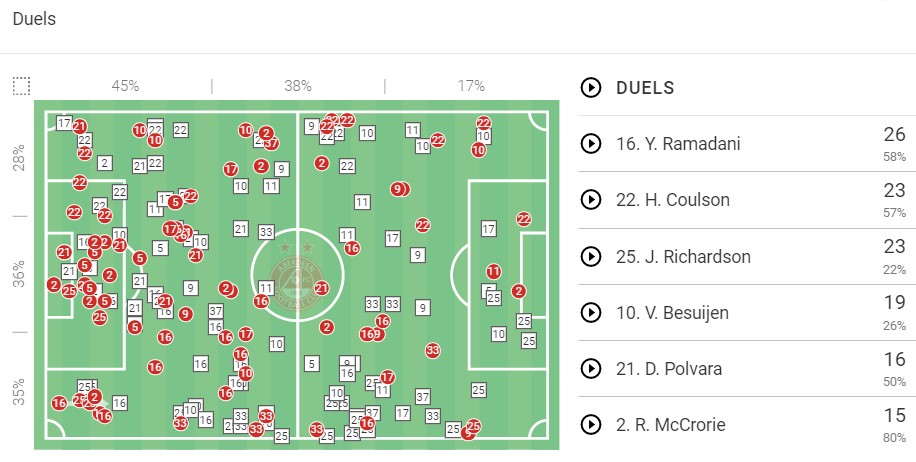 Aberdeen were victorious in 86 out of the 192 duels they fought in. Ramadani contested the most duels, with 26, and in second place were Coulson and Richardson, who competed 23 duels each. 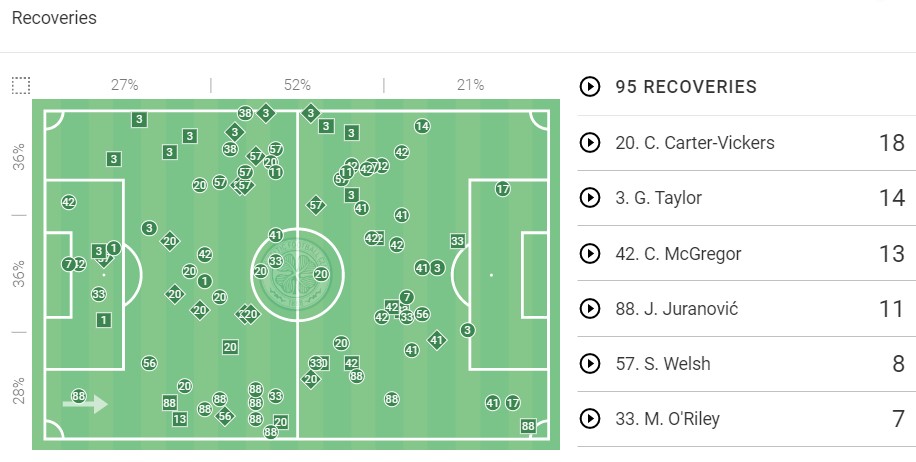 Celtic made 95 recoveries in the match, more than half of which occurred in the midfield. Cameron Carter-Vickers made 18 recoveries, Taylor 14 and Callum McGregor made 13. 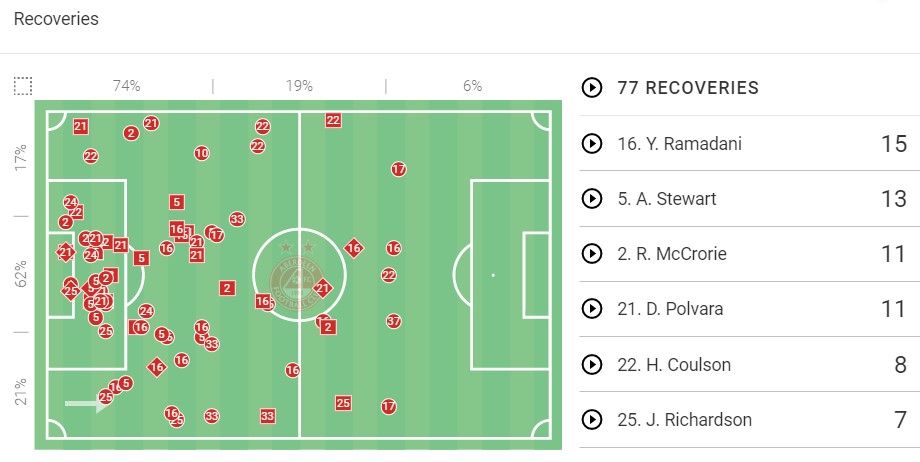 Aberdeen made 18 fewer recoveries of the ball despite seeing far less of it. The top three men in this category were Ramadani, Stewart and McCrorie, who had a combined 39 recoveries for the Dandies.

Celtic started their defence of the title with three points, but the performance could have been better as they underperformed on the xG by at least one or two goals. The Hoops will look to continue the winning run when they visit Ross County on 6th August. On the other hand, Aberdeen will try to bounce back from this defeat when they host St. Mirren on the same day.