Celtic will be facing Dundee FC next in the Scottish Premiership when the Dark Blues visit Celtic Park on Sunday. Celtic come into this game after an easy win over Raith Rovers in the fifth round of the Scottish Cup, while Dundee FC beat Peterhead 3-0 to move into the next stages of the tournament.

Celtic are on an unbeaten run of 17 games and have been in an impeccable form that has helped lead them to the top of the table. Celtic secured a tough win in a five-goal thriller against Aberdeen in their last game in the Premiership. A brace from Jota and a first-half strike from Matt O’Riley helped them defeat Aberdeen as they continue to be the highest-scoring team in the division. Celtic have now won each of their last nine games in all tournaments and as they continue their dominant run. Celtic currently sit top of the Premiership standings after claiming 63 points from 26 games, one point above second-placed Rangers. 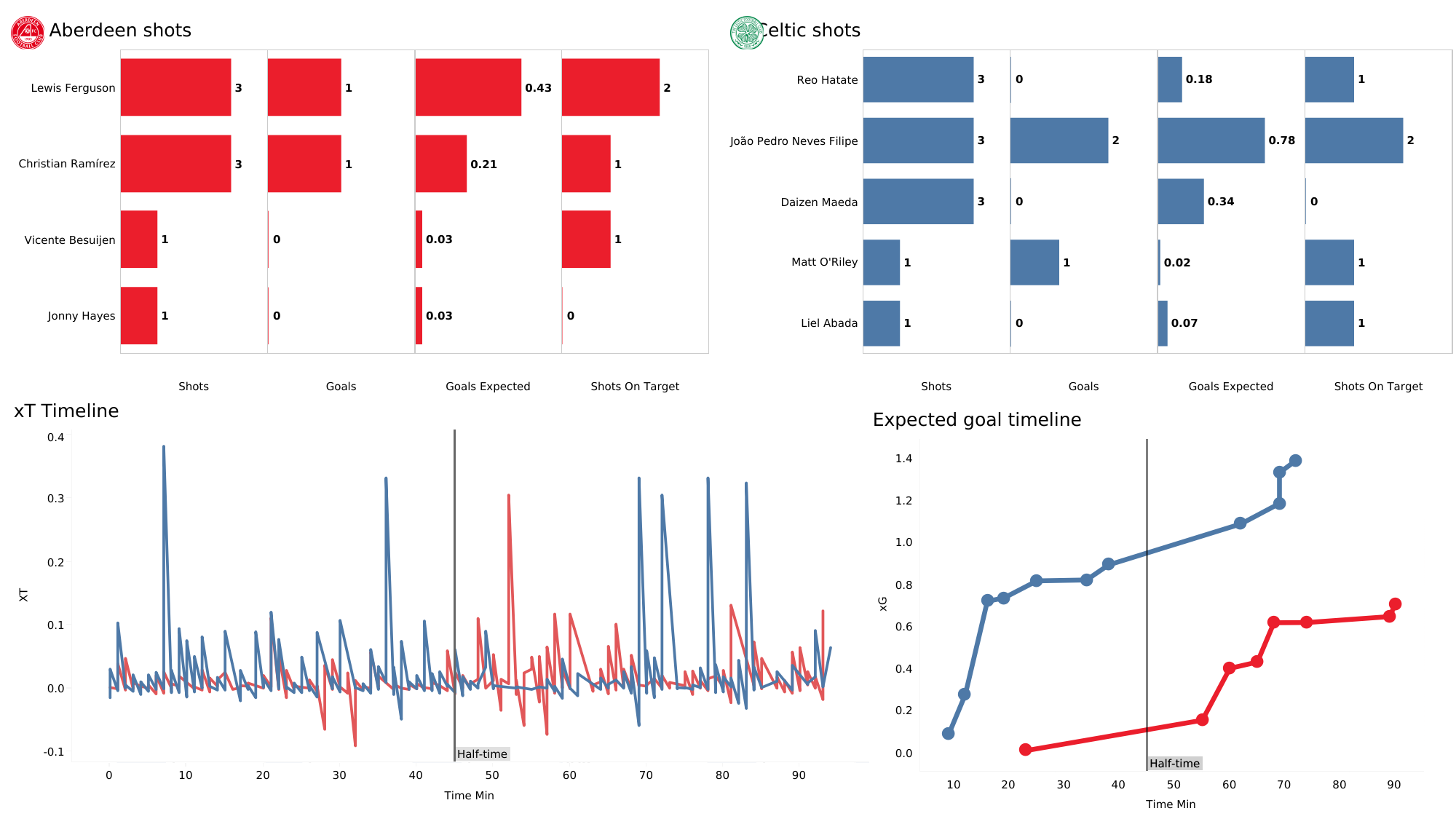 According to the xT timeline, Celtic dominated both halves. Aberdeen were better in the second half as they leveled the score with two goals in five minutes. But Celtic were up to the task, as Jota regained the lead for the Celts with a goal in the next minute. The xG timeline indicates the same, as Celtic had a rising xG since the start of the game. Jota generated the highest xG for them, with two shots on target, and scored with both these shots. 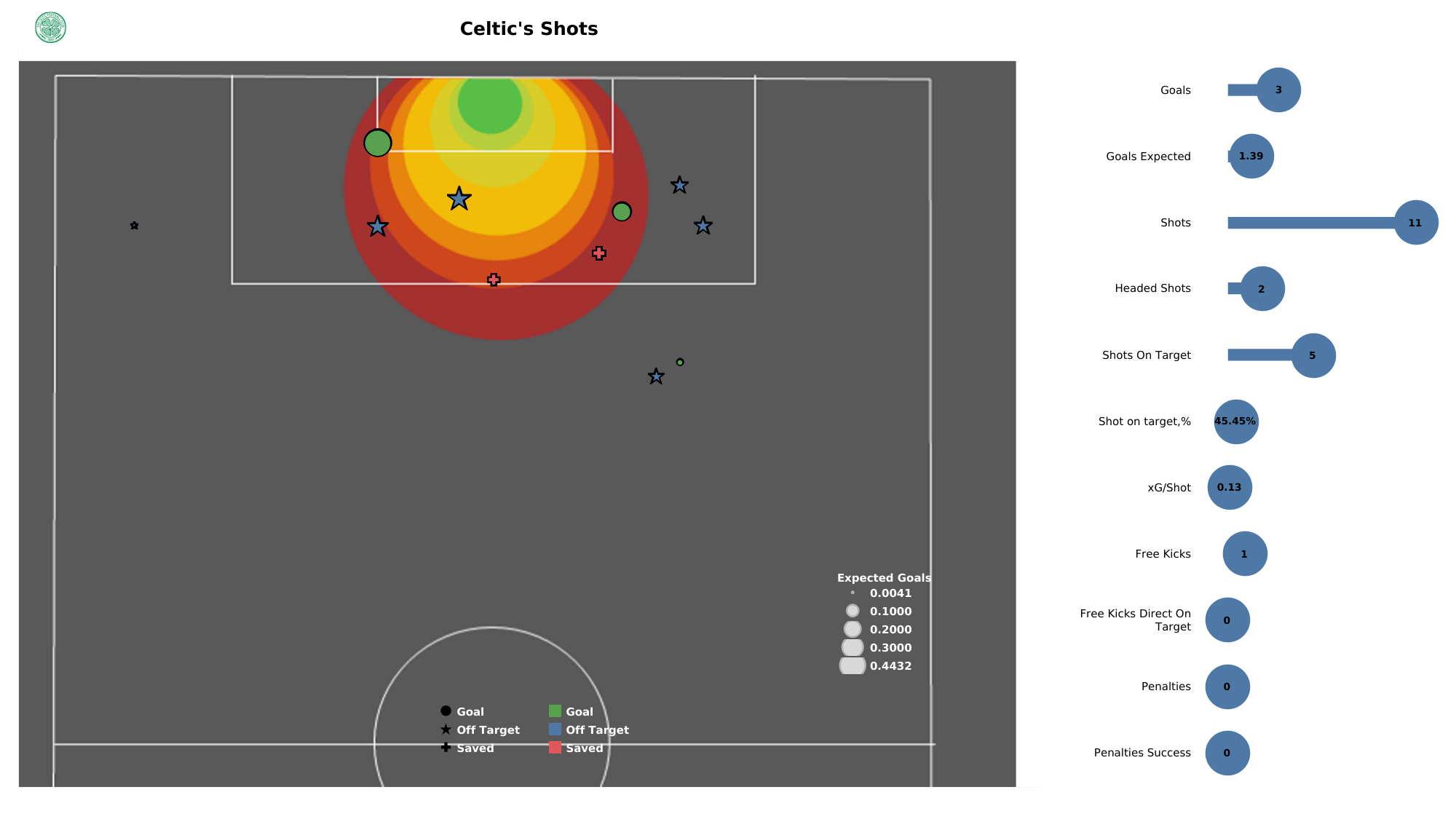 Celtic had a total of 11 shots on goal with five shots on target. They attempted eight of their 11 shots from inside the penalty area and had four shots on target. The shot map indicates that they were able to get into great positions in the box to take a crack on goal, but they did not make the most of the chances they created at times. They had 45.45% of their shots on target, generating an xG of 0.13 per shot.

Dundee, on the other hand, were without a win in their last nine games before their win against Hearts last week. The Dark Blues were able to beat Hearts 2-1 and moved from the bottom of the table to 21 points, one point above St. Johnstone. Dundee were a goal down at halftime against Hearts, but an own goal from Toby Sibbick and a second-half strike from striker Danny Mullen helped them grab all three points. They are currently six points behind Ross County, but do have a game in hand and can cut the gap to three points. 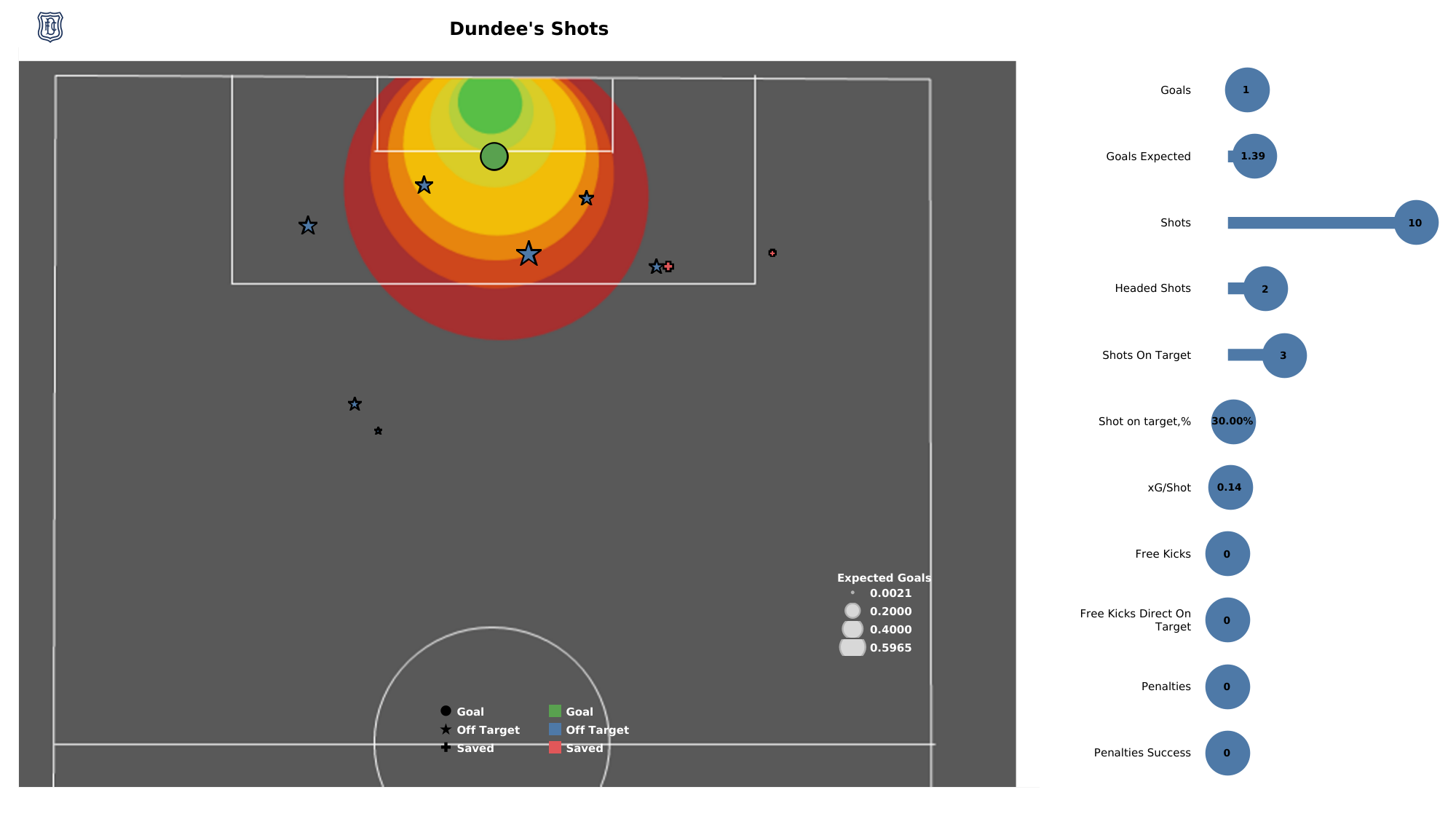 Dundee put up a much better performance against Hearts as they had a total of 10 shots on goal with three shots on target. All three of their shots on target were from inside the penalty area. Dundee need to be more clinical inside the final third if they are to squeeze out a result against Celtic because Sunday’s hosts have the best defense in the league.

Celtic are currently in great form and are expected to easily cruise through this game against Dundee, as the visitors have failed to remain consistent this season.